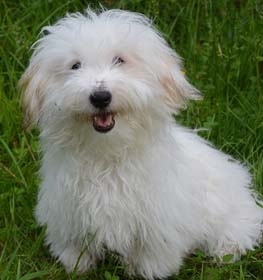 Collection of all the general dog breed info about Coton de Tulear so you can get to know the breed more.

The large island of Madagascar, located off the southeast coast of Africa in the Indian Ocean, is home to many unusual creatures, but one of them has become a beloved export throughout the world: the soft and shaggy Coton de Tulear, a member of the Bichon family who probably came to Madagascar as long as several hundred years ago. The name of the breed reveals its origin. The ‘coton’ refers to the color and the quality of the cotton. ‘De Tulear’ is a small harbor on the huge island of Madagascar. The Cotons were the property of the ruling royal family of Madagascar. It dates back to the 1600s.

The ancestors of the Coton de Tulear were popular companions with the Roman aristocracy who called them ‘table dogs’. The Roman aristocrats were accompanied to dinners and other events by the ‘table dogs’, who were also known as the ‘Meletei’. It is possible that these dogs came to Rome from commercial caravans in Central Asia. After the fall of the Roman Empire, the ‘Meletei’ was mated with another popular breed, the Barbet. The Bichon family was born due to the interbreeding of the Meletei and the Barbet breed. Maltese, Bichon Frise, Bolognese, and Havanese also belong to the mentioned family.

The Coton de Tulear became popular in Europe after the second world war, when Madagascar had attained its independence from the French. The tourism between France and Madagascar increased. Tourists and diplomats, who fell in love with the little dogs while vacationing on Madagascar, brought some of these dogs to their homeland, France, and worked to establish them as a breed. Dr. Robert Jay Russell discovered the breed in Madagascar in 1973 and brought some of them to America. He called the breed ‘Royal Dog of Madagascar’. Dr. Russell established the Coton de Tulear Club of America in 1976. These cute little feral dogs became domesticated more and more as their popularity rose. In 1995 there were 16 Coton breeders in the U.S.