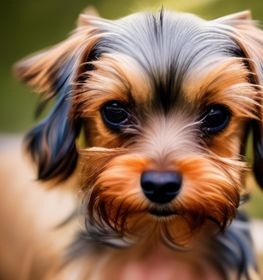 Collection of all the general dog breed info about Dorkie so you can get to know the breed more.

Dorkie As a Working Dog

Dorkies are a mix of  Dachshunds and Yorkshire Terrier. Like other designer dogs, they were developed in the United States over the previous 30 years. It's unclear why this breed was developed, however, it could simply have been to make a sweet-natured companion dog. Apartment residents, single- households, huge families, and the elderly are particularly fond of designer dogs. Basically, these cuties may be found in every sort of home. It isn't recognized as an official breed, thus no pedigree documents are available, and we still don't know much about it, although both parent breeds are having quite a rich history.

Both parent breeds are excellent hunters and were originally bred for hunting.

Dachshunds originated in Germany, where they were bred to hunt badgers and other underground animals. Their mission was made considerably easier by their short legs, long and thin bodies, strong lungs, and excellent sense of smell. These stunning canines captivated even Picasso. They were able to combat dangerous foes like badgers thanks to their independent nature, courage, and one-track mentality. These fearless small dogs even went boar hunting in packs! While they are still used for hunting on occasion, Dachshunds are now mostly kept as companion dogs. They're popular, and they're now ranked 12th on the AKC's list of the most popular dogs. Dachshund memes and videos abound on the internet, and this remarkable breed was the first official mascot of the Olympic Games, as well as the first dog cloned in the United Kingdom.

Dachshund is a combination of the German words 'Dachs' and 'Hund.' It literally translates to "dog of the badger." In modern Germany, the dachshund is known as Dackel or Teckel, with Teckel being more popular among hunters. Dachshunds are also known as wiener dogs or sausage dogs because of their long, slender, sausage-like appearance and structure.

Yorkshire Terriers first appeared in Yorkshire, England, in the nineteenth century. When Scottish miners migrated to Yorkshire, they carried their dogs with them, so Yorkies began their careers in mines, where they chased rats and other vermin. This resulted in their tremendous prey drive, which they still have today. They were recognized as a breed by the British Kennel Club in 1874, and by the American Kennel Club in 1885, the same year as the Dachshund was recognized as a breed. Yorkies have shrunk in size throughout time, and they are now usually maintained as companion dogs. They are presently ranked 10th on the AKC's most popular breeds list.

How old is my Dorkie in human years?

Sharing is caring.
Help our free service by spreading information about dog breeds.
Link to this: Dorkie Breed Information
<a href="https://dogell.com/en/dog-breed/dorkie">Dorkie Breed Information</a>
Despite the best intentions, there may be errors. If you find one, please let us know and we will fix it as soon as possible. Contact us here.