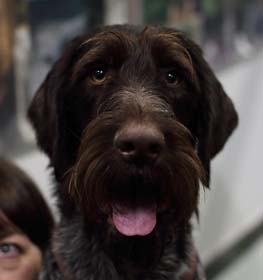 Collection of all the general dog breed info about German Wirehaired Pointer so you can get to know the breed more.

British hunters along with those rich enough to pursue leisurely shooting and hunting started to group together and form breeding clubs that dedicated themselves to accentuating certain characteristics in their animals that they deemed desirable. During the late 1800s, these hunters, sportsmen, and breeders sought after creating a specialized hunting breed for the purpose of hunting for various types of birds and smaller mammals. It was also really important for these breeders that the dogs had the ability to work efficiently on any kind of terrain, in any environment, either in water or on land, with disparate hunting techniques. In other words, they wanted to create the ultimate, robust, durable, intelligent, and most capable and talented hunting companion. In the beginning, to achieve this level of durability and hunting abilities, breeders included the Foxhound, the Poodle, the Pointer in the breading mixture. Moreover, they developed the German Wirehaired Pointer with a distinctive wirehaired coat, which is water-repellent, and which can cope with all kinds of weather the dogs would experience in the hunting fields.

The three German Pointer breeds, mentioned above, emerged from multiple different breeding programs, established in different breeding clubs. Partly because of this, not only indigenous German breeds were used in the programs, besides, the nobility also scoured Europe looking for other breeds with abilities and traits they sought after in their own, newly created breed. Thus, it is also thought that the German Wirehaired Pointer is the result of cross-breeding several other European breeds as well. There are many ongoing debates about the exact lineage and ancestry of the breed, however, it is more than certain that the German Shorthaired Pointer, the Pudelpointer, the Griffon Vendéen, and the Wirehaired Pointing Griffon were also included in the DNA pool.

Breeders managed to establish, homogenize, and write up the breed standard, so by 1880, the German Wirehaired Pointer was recognized as a distinct Pointer breed, enabling them to be shown at dog shows, trials, and in hunting sports. Later, in 1928, the breed was admitted into the German Kartell for dogs, meanwhile, during the 1920s, the dogs were also exported to the United States of America, to gain further recognition and popularity. The breed’s popularity began soaring overseas too, and in 1953, the German Drahthaar Club of America was founded. The AKC (American Kennel Club) recognized the German Wirehaired Pointer in 1959. Nowadays, the breed is really trendy and popular, people usually keep GWPs as devoted, loyal, active, and intelligent family companions, who are also great with children. Furthermore, the GWPs are also employed, even today as talented hunting partners.

Sharing is caring.
Help our free service by spreading information about dog breeds.
Link to this: German Wirehaired Pointer Breed Information
<a href="https://dogell.com/en/dog-breed/german-wirehaired-pointer">German Wirehaired Pointer Breed Information</a>
Despite the best intentions, there may be errors. If you find one, please let us know and we will fix it as soon as possible. Contact us here.