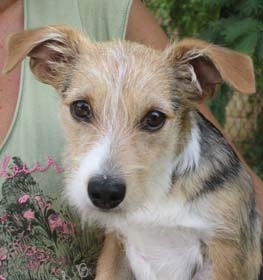 Collection of all the general dog breed info about Jack Chi so you can get to know the breed more.

Jack Chi As a Working Dog

The Jack Chi, also known as the Jackhuahua, is a relatively newly developed designer dog breed, which is a result of crossing the Jack Russel Terrier with the Chihuahua. The Jack Chi was most likely created approximately during the middle of the 20th century. The trend of creating new hybrid breeds began around the middle of the 1900s, in North America and in Canada, with cross-breeding purebred dogs with each other, in order to develop new, designer breeds. These hybrid dogs were an instant success, for the reason that they usually inherited the best and most desirable qualities and traits of the parent breeds. Unfortunately, this popularity does not mean, that we are certain about every detail of these hybrid breed’s ancestry, and the intention which led the breeders to develop these dogs.

With the intention of having a better and clearer understanding of why breeders choose to mix these two breeds and create the Jack Chi, we need to examine the two-parent breeds’ histories. Firstly, the Chihuahua’s exact ancestry is not clearly known, there are two major theories about its development. The first is that the breed is descended from the so-called Techichi dog indigenous to South America. Wall cravings portraying a dog resembling the Chihuahua from the Tolec people were also detected in South America. After the Aztecs conquered the Tolec tribes, they also took their dog, the Chihuahua, and started to develop them more in order to better suit their needs. According to Aztec mythology, the Chihuahua possessed special powers, with which they could accompany and guide their owners in the afterlife. After their owners passed, the dogs were buried or cremated with them, in order to keep their strong bond. The other theory suggests that the Chinese people brought the Chihuahua to Mexico during the late 1850s. Secondly, the Jack Russel Terrier can trace its origins back to England to 200 years ago. A man named Parson Russel is credited with the creation of the Jack Russel Terrier during the middle of the 19th century. He sought after a dog that is capable to keep pace with the bigger hounds during a hunt for foxes and other smaller prey. Later, during the early 1930s, the Jack Russel Terrier was brought to the United States of America, where it became popular among farmers, ranchers, and horseback hunters. Through the decades, the breed has also been used as very successful rat hunters, ensuring their prey drive remains high even today.

Both of Jack Chi’s parent breeds are well-recognized and established breeds, mostly kept as family companions. The Jack Chi is the perfect combination of these very popular two breeds. The Jack Chi combines the energetic, playful, agile, and feisty nature of the Jack Russel Terrier, while also having the confident, loyal, and affectionate traits of the Chihuahua. Even though most of the puppies born out of crossing purebreds, are very unpredictable, the majority of the Jack Chi puppies’ physical appearance is quite predictable and identical.

Nowadays, the Jack Chi is not the most popular hybrid breed, but it has a fair number of fanciers all around the world. Being the perfect combination of the Chihuahua and the Jack Russel Terrier, the Jack Chi is a loving, energetic, affectionate dog, all in all great family companion.

How old is my Jack Chi in human years?