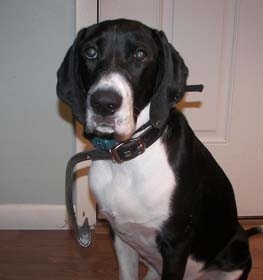 Collection of all the general dog breed info about Lab Pointer so you can get to know the breed more.

The Lab Pointer is among the most recently developed new hybrid breeds, it is thought that the breed is originated from the late 1990s. Even though, it is possible that mixes, resembling the Lab Pointer, were in existence as a result of natural mating through the years. The trend of creating new designer breeds started around the middle of the 20th century, in North America and in Canada, with crossbreeding purebred dogs with each other, with the intention of developing new breeds. These hybrid dogs gained popularity instantly, for the reason that they usually inherited the best and most desirable qualities, abilities, and traits of their parent breeds. Unfortunately, this popularity does not mean, that we are certain about every detail of these designer breed’s ancestry, and the intention which led the breeder to create these dogs.

The Lab Pointer was developed by cross-breeding the Labrador Retriever with the Pointer. In order to have a better understanding of the motives and reasons why breeders sought after mixing these two breeds, we should dive deeper to explore the two-parent breed’s histories. Both the Labrador Retriever and the Pointer have long and extensive histories, and both of them are recognized by all of the major kennel clubs.

Firstly, the Labrador Retriever can trace its ancestry back to Newfoundland back to the early 18th century. Back in time, the breed was known as the Saint John’s Water Dog, and the dogs’ purpose was to give assistance to the fishermen with moving the giant and heavy nets and to catch and to control the vermin population at the ports, and on the ships. Later, the breed was re-named after the Labrador Sea nearby, where the breeding’s last stage is thought to have taken place. According to the experts, the Labrador Retriever was brought to England in the 1820s, where the dogs were further developed to be skilled retrievers and hunting companions. The Labrador Retriever quickly got really famous in all parts of the world. Unfortunately, it was pushed to the brink of extinction towards the end of the 1890s in their native lands. However, during the 1920s, the breed got to the United States of America, where it was an instant hit. Nowadays, the breed is considered to be one of the most popular breeds of all time. They are versatile, intelligent, funny, all in all, the perfect breed for most. Secondly, the Pointer is originated from the early 17th century, from the Iberian Peninsula. The breed was used as a hunting dog, who excelled at pointing and tracking too.