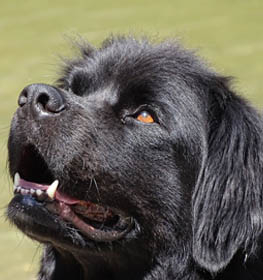 Collection of all the general dog breed info about Newfoundland so you can get to know the breed more.

The exact origins of the Newfoundland breed are not certain; however, it is presumed that as their name suggests, that the breed finds its origins in Newfoundland, Canada, located on the north-eastern shore of the country. The first pioneers, who colonized Newfoundland in the 7th century, found two indigenous dogs in the region. The smaller type is considered to be the ancestor of today’s retriever breeds, and of the now-extinct St. John Water Dog, whereas the larger type was the forebearer of the Newfoundland we know today.

There are several theories around the breed’s historical background, one of them is that the dogs were introduced by the Vikings in the 11th century, and they bred them with the local wolves. According to another theory, Newfoundland is a result of cross-breeding the now-extinct American Black Wolf with the Tibetan Mastiff. The third assumption is the most likely among these, it states that the breed is the descendant of many European breeds interbred with each other, including the Portuguese Water Dog, Mastiffs, and the Pyrenean Sheep Dog, around the 15th and 16th centuries. In these early times, the breed was kept as an all-purpose working companion for fisherman. The dogs were mainly used to haul fishing nets and haul heavy equipment and carts, just like horses. Canadian fisherman relied on Newfoundland for a long time, as peerless shipboard working dogs who specialized in rescuing men from the water. The breed is an excellent swimmer, robust and strong enough to save a grown man from drowning in the water.

Sometimes in the late 18th century, an English botanist, named Sir Joseph Banks, acquired a Newfoundland, and in 1755 George Cartwright named the breed. In 1780 the breed got to the edge of extinction, due to government-imposed restrictions stating that Canadian families had to pay taxes on each dog they kept. A painter, named Sir Edwin Landseer significantly contributed to the breed’s resurgence, thanks to his paintings portraying famous people alongside Newfoundlands. In an honor of his efforts, later, both the black and the white variety of the breed got named after him, as Landseer. The Newfoundland is one of the world’s most beloved and valued breeds, with multiple examples showing their dedication to their owners. When Louis and Clark begin their track across the American continent, in 1802, a Newfoundland named Seaman was part of the expedition. They used him as a guard and hunter. One Seaman saved their life, by running off a huge rouge buffalo. Today, honoring Seaman there are ten different Louis and Clark monuments that depict him too.  In the late 1800s, Professor Albert Heim of Switzerland identified and described the breed.

The breed was first represented in England in 1860, where the dogs were extensively bred. This is the reason why most of the Newfoundlands in the world are descended from forebears born in England. The Newfoundland got registered by the AKC as their 32nd dog breed (American Kennel Club) in 1879. The breed was a beloved character at the White House multiple times. One named Brumus earned his breed’s “nanny dog” reputation, helping Senator and Mrs. Robert F. Kennedy to look after their eleven kids. President James Buchanan was also a Newfoundland owner. His dog, named Lara was considered a celebrity around the palace, because she always rested motionless for hours, with one eye open and one closed, always keeping an eye on her owner’s safety. Today the breed is kept as a family dog, yet they still work as search and rescue dogs with police and firemen.