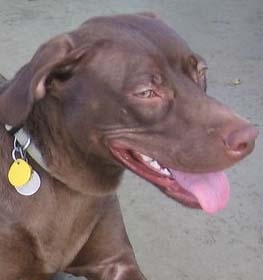 Collection of all the general dog breed info about Labmaraner so you can get to know the breed more.

The Labmaraner is a hybrid dog breed, which was created approximately around the end of the 20th century. Nonetheless, it is presumable that crosses, similar to the Labmaraner, were in existence as a result of natural mating. The trend of developing new designer breeds began around the middle of the 20th century, in North America and in Canada, with crossbreeding purebred dogs with each other, with the objective of creating new breeds. These designer breeds were an instant success, because they usually inherited the best and most desirable qualities and traits of their parent breeds. Unfortunately, this popularity does not mean, that we are certain about every detail of these designer breed’s ancestry, and the intention which led the breeder to create these dogs.

The Labmaraner, also called the Weimador, is a result of cross-breeding the Weimaraner with the Labrador Retriever. Breeders sought after a breed, which is elegant, yet energetic, and also has a friendly nature towards people, while having enough strong prey drive to be an excellent hunting companion. In order to gain a better understanding of the reasons and motifs behind the Labmaraner’s development, and initial creation, we need to take a look at the breed’s ancestors. Firstly, the Labrador Retriever can trace its ancestry back to Newfoundland back to the early 18th century. The breed was known as the Saint John’s Water Dog back then, and the dogs’ purpose was to help fishermen move the giant and heavy nets and to catch the control the vermin population at the bay. Later, the breed was re-named after the Labrador Sea nearby, where the breeding’s last stage is thought to have taken place. According to the experts, the Labrador Retriever was brought to England in the 1820s, where the dogs were further refined to be skilled retrievers and hunting companions. Unfortunately, it was pushed to the brink of extinction towards the end of the 19th century. Nonetheless, during the 1920s, the breed got to the United States of America, where it was an instant success. Nowadays, the breed is believed to be one of the most popular breeds of all time. They are versatile, intelligent, funny, all in all, the perfect breed for most. On the other hand, the Weimaraner finds its origins in Germany, all the way back to the early 19th century, in Weimar Court. German noblemen and hunters wanted a fleet-of-foot and strong dog, who is capable of bringing the down larger game, like a deer. Regarding the flighty nature of the deer, the dogs needed to be obedient, so that they will be stuck close to their masters until given the command to chase. The earliest Weimaraners were the result of breeding the English Pointers with Bloodhounds, Great Danes, and German Shorthaired Pointers. During the middle of the 1900s, the breed’s popularity has led to a rash of unregulated, mass breeding, which caused a lot of health problems.

Although both of the Labmaraner’s parent breeds are well-recognized by most of the major kennel clubs and organizations, the Labmaraner is not registered yet, similarly to any other designer breed. However, breeders are constantly working on getting to a point where they can draw up a breed standard, and get it accepted. Fortunately, usually, the Labmaraner is a healthy breed, the dogs can inherit the most common health problems from their Labrador ancestors, such as the infamous hip dysplasia.

The Labmaraner is the perfect combination of these two breeds because the dogs came out as energetic, friendly, extremely intelligent, all in all, excellent family companions.