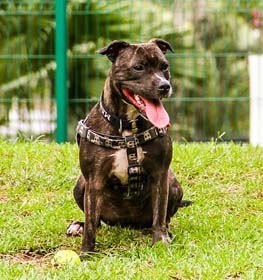 Collection of all the general dog breed info about Labrabull so you can get to know the breed more.

The Labrabull, or in its other name, the Pitador, is a hybrid breed, which was developed in the late 1990s, presumably in North America, or in Canada. The tendency of creating new hybrid breeds started towards the middle of the 20th century, in North America and in Canada, with cross-breeding purebred dogs with each other, in order to create new, hybrid breeds. These hybrid dogs instantly became popular and sought after, for the reason that they usually inherited the best and most desirable qualities and traits of the parent breeds, thus they suited better to their owner’s needs. Unfortunately, this popularity does not mean, that we are certain about every detail of these hybrid breed’s ancestry, and the intention which led the breeder to develop these dogs.

The Labrabull is the result of crossing America’s two favorite breeds, the Labrador Retriever with the American Pit Bull. Even though these two breeds mixed naturally over the decades, the first planned and organized mating between a Labrador and an American Pit Bull happened in the United States of America towards the end of the 1990s. Breeders wanted to create a new breed, in order to eliminate health-related issues that tend to affect purebred dogs, as they are often inbred. In order to gain a better understanding of the reason why the Labrabull is increasingly popular, we need to look at the parent breed’s histories.

Firstly, the Labrador Retriever can trace its origins back to Canada, to Newfoundland, to the 1700s, when the breed was first mentioned and bred in an organized manner. The breed was popular among the fishermen’s community, they used the dogs to retrieve lines and fish, and to help them move the giant heavy fishing nets. Later, the fishermen took the dogs to their homes, thus the breed became an extremely social, family companion. During the 1800s, English sportsmen started to fancy the breed for their intelligence, work ethic, loyalty, and for their hunting and retrieving instinct. Throughout the decades, the Labrador became America’s most wanted and loved the breed. They also excel at various working roles, including search and rescue, assistance for the disabled, therapy companions, and police work. Secondly, the American Pit Bull was created during the 1800s, from the English Pit Bull Terrier. The breed was developed for bull and bear-baiting. Fortunately, this cruel sporting activity was legally banned in England in 1835, yet unfortunately, as a result, dogfighting replaced it, where the Pit Bulls were often used. Consequently, the breed was bred to be aggressive, brave, strong, and tenacious, nevertheless, they were well-trained to never bite humans. After the breed got to the United States, they were mostly used on farms as guarding dogs and hunting companions. Even though American Pit Bulls’ history contains questionable moments, the breed became increasingly popular, and today it is one of the most sought-after breeds in the United States of America.

The Labrabull is the perfect combination of these two breeds, they inherited the intelligence, work ethic, and friendliness of the Labrador and the strong physique, loyalty, and good nature of the Pit Bull. Moreover, Labrabulls usually can work and excel in similar roles as the Labrador Retriever. Even though the Labrabulls are mostly first-generation specimens, breeders are constantly working on homogenizing the breed, in order to have a breed standard. Just like any other hybrid breed, the Labrabull is recognized by the Dog Registry of America (DRA), the American Canine Hybrid Club (ACHC), the International Designer Canine Registry (IDCR).