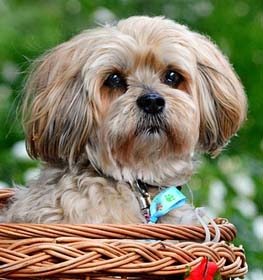 Collection of all the general dog breed info about Lhasa Apso so you can get to know the breed more.

The Lhasa Apso is originated from the Tiber and evolved perfectly for the harsh climate of the Himalayas, around 800 B.C., which makes it one of the oldest recognized breeds in the world. Researchers have proven that the Lhasa is one of the breeds that is closely related to the ancestral wolf such as; Akita, Shiba Inu, Siberian Husky, and many others. The breed takes its name from the holy city of Lhasa and for thousands of years it was bred by nobility and monks and their task was to guard and protect the Buddhist monasteries therefore considered sacred. In their home country, they are also known as “Aspo Seng Kyi”, meaning “Bearded Lion Dog”. According to research, these little dogs were highly prized as people believed that the bodies of the dogs could be entered by the human soul, after death, while they awaited reincarnation into a new body. However, the only way to get a Lhasa back in the times was as a gift, and one could not buy one.

From the beginning of the Manchu Dynasty in the 16th century until as recently as 1908, the Dalai Lama sent Lhasas as gifts to the Emperor of China and members of the imperial family because they were thought to bring them good luck and prosperity.

The breed first entered the West in the early 20th century and was recognized as the ‘Lhasa Terrier’ by the Kennel Club in London in 1908 but the First World War had its effect on breeding. However, the ‘original’ American pair of Lhasas was actually a gift from the 13th Dalai Lama, Thubten Gyatso, to C. Suydam Cutting, a known world traveler, and naturalist, who arrived in the United States in 1933. Mr. Cutting, later on, received another pair of Lhasas from the Tiber and their Hamilton Farms’ Lhasa Apsos were extremely important in establishing the breed in the United States. Two years later, in 1935, the American Kennel Club accepted the breed as the Lhasa Terrier but was re-named Lhasa Apso in 1944. Not much later in 1959, the breed was moved from the terrier group to the non-sporting group.

Today the breed has kind of lost its sentinel status to take its place as a popular show dog and household pet but the little Lhasas still retain the behavior traits that once made them trusted sentinels.

All data & function free to all dog fan. Please support Dogell so that we can maintain and develop this site.
Sharing is caring.
Help our free service by spreading information about dog breeds.
Link to this: Lhasa Apso Breed Information
<a href="https://dogell.com/en/dog-breed/lhasa-apso">Lhasa Apso Breed Information</a>
Despite the best intentions, there may be errors. If you find one, please let us know and we will fix it as soon as possible. Contact us here.