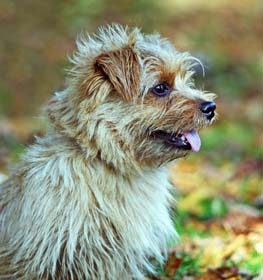 Collection of all the general dog breed info about Norfolk Terrier so you can get to know the breed more.

The Norfolk Terrier was originally bred to hunt and kill vermin and catch foxes in the early 1800s, because of their sturdy, alert and fearless nature and even temperament.

An English dog breeder named Frank “Roughrider” Jones in the early 20th century developed little red terriers by including several breeds like the Border, Cairn, and Glen of Irish terriers. At first, the Norfolk (ears down) and the Norwich (ears up) terriers were considered to be the same breed. Both of these breeds’ names were originated from near towns in England, Norwich on the Eastside, and Norfolk which lies north of London.

Being originated from the United Kingdom, the little red terriers quickly became a state icon. A Cambridge student, Jodrell Hopkins was one of the early breeders of Norfolk / Norwich terriers, alongside a dog dealer Charles "Doggy" Lawrence, they together bred and sold little red terriers to students. The breed quickly found its fanciers among the students, who used them mainly for catching rats around the colleges and named them Trumpington Terrier, in urban slang, after a street near Cambridge.

Several fanciers began to refine the breed. One of the first exporters of the breed was R. J. Read who later became the president of the Norwich Terrier Club in England.

Phyllis Fagan was another very influential breeder in Norfolk’s history. He acquired a red female terrier named Brownie. Many believe that the Norfolks today are descended from her. Brownie was famous among the terrier community, thanks to her gracious victories in dog shows.

The Norwich and the Norfolk breed were considered to be the same because until the early 1920s both drop-eared and prick-eared dogs were interbred with each other. From the 1930s the two breeds started to diverge. The AKC (American Kennel Club) recognized the breeds in 1936. However, both the United Kingdom and the United States officially recognized Norfolk to be an independent, distinct breed in 1964.

In 1977, The Canadian Kennel Club accepted the Norfolk and the Norwich to be distinct breeds. Two years later, in 1979 the AKC did the same.