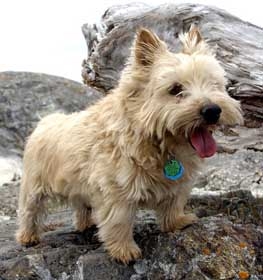 Collection of all the general dog breed info about Norwich Terrier so you can get to know the breed more.

The Norwich Terrier is one of the many terriers bred to control Britain’s rodent population. The breed is the quintessential terrier. Considered to be fearless and more sociable than the usual independent-minded terriers, so hunters are started to use Norwich in packs on foxhunts.

The breed was considered to be a “well-kept secret” over decades when they were simply used as vermin hunters in East England.

One Norwich named Rags came into possession of a stable owner in the town of Norwich. According to records from the early 1850s, Rags was bred and sired multiple litters of portentous and superb quality. He is considered today, the grandfather of all Norwich Terriers.

Being originated from the United Kingdom, the breed quickly became a state icon and was associated with the University of Cambridge in the 1870s and 1880s. Norwich ownership had become fashionable among the students. The breed was known as Trumpington Terrier in urban slang, for the reason that the majority of students acquired the dogs as pets from a livery stable on a street nearby named Trumpington.

The American history of the breed began in 1914 when Frank “Roughrider” Jones bred a dog named Willum descended from Rags. He exported Willum to Philadelphia, where the breed quickly found its fanciers, thanks to the cheerful behavior and the cute prick-eared puppies. Although the Norwich’s cuteness was indubitable, the breed gained more interested parties among horse lovers and fox hunters, because of their high-energy level and inquisitive nature. The Norwich Terrier in the United States was known as the Jones Terrier.

The AKC (American Kennel Club) recognized the breeds officially in 1932. However, because of many exterior and behavioral similarities, the breeds Norwich and Norfolk Terrier were considered to be the same, until 1979 when they were recognized as separate.

Speaking of today’s representation of the breed, Norwich has one of the highest pop-culture profiles, because of a dog named Winky played by a real-life show champion, from the movie “Best in Show” which is based on a true story. After Winky's owner injured herself, she forced her husband, who had the strange condition of having two left feet, to show the dog in the competition. In spite of his complete inexperience in the ring, he led Winky to victory. The movie is a parody of the intense and complex emotions and interactions experienced by show dog owners, their families, breeders, and handlers.