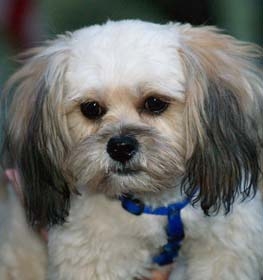 Collection of all the general dog breed info about Peekapoo so you can get to know the breed more.

The Peekapoo is one of the oldest of the hybrid or designer breeds. The breed was created in the 1950s with the cross of a Pekingese with a Poodle (probably a Toy or a Miniature Poodle). According to experts, the breeders’ purpose was to produce a non-to-low shedding dog suitable for people with allergies. The Peekapoo has quickly gained popularity by the early 1960s due to its small, lap-friendly size and sweet affectionate temperament.

However, to be able to understand the breed’s history, we need to look at both parent breeds. As for the Pekingese, the breed has pampered past and was treated like royalty by the Chinese. According to the legend, the Pekingese are the offspring of a love affair between a lion and a marmoset. As a result of this, people started calling them the Lion Dogs because they resembled the ancient Chinese guard lions known as Shishi or Pelchie dogs. It was believed that these dogs had mystical powers that could protect the palaces and temples. During that time, they were only owned by royalty, and they were so treasured that they had their own servants. Stealing one was punishable by death. In addition, when a member of royalty died, their dog was euthanized and buried with their master to accompany them to the afterlife. Furthermore, during the 8th century, the Pekingese were never allowed to leave the palace until the discovery of the breed during the Opium Wars of 1860. During the conquest of the Imperial Summer Palace, five Pekingese were discovered and sent to Britain, where one was gifted to Queen Victoria. She named him Looty because of how the dogs were acquired. When the Pekingese arrived in Britain, they quickly became popular, but their scarcity made the price unaffordable for all but the wealthiest. As they were carried in the long sleeves of the royal robes worn in the palaces, Pekingese were previously known as Sleeve Pekingese. The Pekingese was accepted into the American Kennel Club in 1906 and is the 93rd most popular dog in the United States. Unfortunately, in recent years the popularity of the breed has declined, but in 2021 a Pekingese named Wasabi won the Westminster dog show.

On the other side, there is still a great debate on the Poodle’s origins but it is believed that they descend from the old French Barbet. In fact, the Poodle was popular as a duck hunting dog and eventually became the national dog of France. However, it is likely that they were first bred in Germany. Anyhow this breed actually consists of three types; the Toy Poodle, the Miniature Poodle, and the Standard Poodle. The Standard Poodle is the oldest of all and the Miniature and Toy variations were developed for those who desired smaller dogs. Despite their small size, the Toy and Miniature Poodles were also used as working dogs, especially desired for circuses because of their high intelligence and athleticism.

Overall, combining a Pekingese and a Poodle made a fairly balanced dog that is affectionate but independent too. Similar to the parent breeds, the adult Peekapoos are small in stature, standing less than 11 inches tall, and if a Pekingese is crossed with the smallest poodle, called the Toy Poodle, then it is called a teacup Peekapoo. As the breed is not purebred, there is no formal breed standard for how the puppies should look. These petite pups have coats in colors ranging from silver, grey, chocolate, and black to white, cream, apricot, and buff.