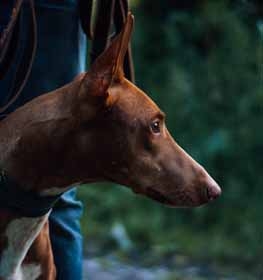 Collection of all the general dog breed info about Pharaoh Hound so you can get to know the breed more.

Pharaoh Hound As a Working Dog

The Pharaoh Hound is proved to be an ancient hound breed originated from Egypt, where many reminders were found in art and literature about their early existence. The breed is one of the oldest domesticated dogs in recorded history. An artifact from 4000 BC. presents two Pharaoh Hound-shaped dogs hunting gazelles in the desert. A dog resembling the Pharaoh Hound was often portrayed as the companion of nobles and kings in early ancient Egyptian art. Reliefs of the Pharaoh Hound can be found in the tomb chapel of Senbi and Mereuwka. A letter was also discovered and restored dating to the 19th Egyptian dynasty mentioning a tan long-tailed dog whose face glows like a God, a reference no doubt to the breed’s habit of blushing in the sun.

The breed’s history would be different without the intervention of the Phoenicians. They sailed the Mediterranean 2,500 years ago, from what is today known to be Lebanon, as seafaring traders, doing business of several luxury items. It is presumed that the Phoenicians disseminated Egyptian hounds throughout the whole ancient world, as far west as England. According to this presupposition, it is said that it was the Phoenicians who introduced the Pharaoh Hound to Malta, where they were used as rabbit hunters. Back then, the breed was called Kelb tal-Fenek, which translates to “dog of the rabbit”, after the prey the local hunters used the dogs to catch. Thanks to their compassion and talent, the breed thrived in Malta and later, in 1979 the breed became the official national dog of Malta.

Taking into account the genetics and the DNA analysis of the Pharaoh Hound and of the Cirneco dell’ Etna of Sicily, indicate that their separate breed formation occurred within the last 200 years, in spite of the genetic foundations of these dogs dare to the more distant past.

The breed remained fairly unknown in the west until arriving in England in the early 1930s. The first litter of Pharaoh Hounds born outside Malta was in 1963, in the United Kingdom. In the same year, the breed was recognized by the Fédération Cynologique Internationale, under the patronage of the United Kingdom. In 1974, a breed standard was approved by the British Kennel Club.

In 1967 the first Pharaoh Hounds were exported to the United States. Not much after that, in 1970, the Pharaoh Hound Club of America was founded, and the breed was officially recognized by the AKC (American Kennel Club) in 1983. Nowadays the Pharaoh Hound is still considered an uncommon breed, however, they can be found wherever the breed’s fanciers appreciate the dogs’ unique looks and characteristics.

How old is my Pharaoh Hound in human years?