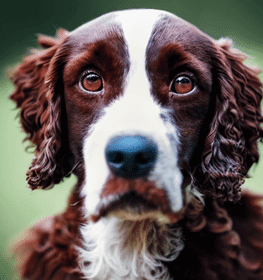 Collection of all the general dog breed info about Pont-Audemer Spaniel so you can get to know the breed more.

Pont-Audemer Spaniel As a Working Dog

The exact origin of the Pont-Audemer Spaniel breed is unknown, nonetheless, it is commonly thought that it has been developed around the 1800s, and its predecessors are likely to have been a mix of English and Irish Spaniels, more precisely on one hand the Irish Water Spaniel, and on the other hand, the French Picardy Spaniel. The breed’s name suggests that the dogs were developed around the region of Pont-Audemer within Normandy county in the northern part of France.

According to some sources, it is stated that the Barbet also played a role in the creation of the Pont-Audemer Spaniel. Traditionally, the breed was known as a setter and they were used to hunt waterfowl in or near water. The setter is a type of dog that sets or crouches down when they spot their prey. The hunters had noticed them pointing and standing completely still and then usually flush the prey out themselves independently. Thus, the breed was well-known and appreciated among hunters for its abilities, hunting competencies, and intelligence. The Pont-Audemer Spaniel is sometimes lovingly referred to as “Le Petit Clown de Marais” in French, which translates to “the little clown of the marshes”, indicating that locals still appreciate both its funny personality and its unparalleled ability to hunt in wet conditions.

How old is my Pont-Audemer Spaniel in human years?

Sharing is caring.
Help our free service by spreading information about dog breeds.
Link to this: Pont-Audemer Spaniel Breed Information
<a href="https://dogell.com/en/dog-breed/pont-audemer-spaniel">Pont-Audemer Spaniel Breed Information</a>
Despite the best intentions, there may be errors. If you find one, please let us know and we will fix it as soon as possible. Contact us here.