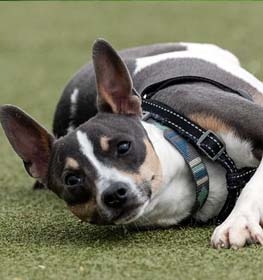 Collection of all the general dog breed info about Rat Terrier so you can get to know the breed more.

Rat Terrier As a Working Dog

According to researchers, it all began in England around the 1820s. At that time they were known as “Fyce” because of their spirited nature when going after their prey, in America, it is pronounced as “Feist”. However, others claim that it is an American breed even though the breed was brought to the USA in the 1890s. What we know for sure is that they were the result of working with the Fox Terrier, Bull Terrier, Manchester Terrier, and Old English White Terrier, to name a few.

Being a farm and a hunting dog, the need for the Rat Terrier to catch prey and pests drove breeders to start adding new strains to the breed in the 1910s and 1920s. In the Midwest, the breed was bred to Whippets and Italian Greyhounds to produce a quicker dog who could control the jackrabbit problem. The new and improved Rat Terrier could keep up with the fast-moving rodent and continued to prove his value.

Furthermore, when they first came to America the breeding process was based on function. They were mostly black and tan colors with their ears buttoned over and they were around 8kgs, a medium size. According to some historians, president Theodore Roosevelt is said to have named the breed as he called his own dog Rat Terrier who had solved the White House rat problem, but not everyone agrees. He kept many Rat Terriers as house pets for their keenness, intelligence, and perfect self-groomed appearance. He often hunted with the breed as well. There is still an ongoing debate whether the dog that the president owned was in fact the same Rat Terrier as appears today. The short-legged dog that Roosevelt had has become the accepted breed standard for the terrier named after him. Not so much later, they quickly became popular throughout the Southern and Central American regions. The settlers found that the breed could easily adapt to different climates and they had an excellent ability to keep the farms free of rats and foxes. However, the Americans started modifying the breed for their needs. The Smooth Fox Terrier was re-introduced setting the predominance of white coat color and the breed was also bred to the Beagle to create a more pack-oriented dog. This was the time when the Rat Terrier earned an even stronger sense of smell and faster speed which came from the Whippet.

Moreover, the breed was very popular between the 1910s and 1940s but eventually started to decline after farmers started using poison to control rodent populations. By the end of the 1950s, the breed was no longer widespread. However, a handful of breeders did not give up and managed to sustain the breed until a reemergence in the late 1970s.

The Decker Rat Terrier is a strain of the breed that gained popularity. It all began with a dog who was owned by a hunter called Milton Decker, who thought that his own dog, Henry, had terrific qualities that he wanted to preserve in his breeding program. He started producing a larger Rat terrier with fixed ears, a hunting dog who could even retrieve from water. The Deckers were used by many people for hunter wild pig, deer, and bear as well as in more traditional Rat Terrier roles.

In 1972, the first hairless Rat Terrier was born and from that little hairless dog a new strain of the breed was developed further and it became known as the American Hairless terrier which comes in two sizes. Overall we can say that the Rat Terrier is a breed of many breeds that have brought in their own individual characteristics and traits. It has also been recognized by the American Kennel Club and several other American clubs.

How old is my Rat Terrier in human years?