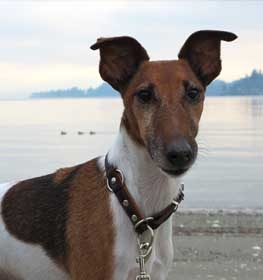 Collection of all the general dog breed info about Smooth Fox Terrier so you can get to know the breed more.

The Fox Terriers have a lot of history behind them. Today, there are two types of Fox Terrier breeds, the Smooth Fox Terrier and the Wire Fox Terrier. For more than 100 years, the two were registered and showed in the US as one breed with two varieties distinct from each other by coat type and head shape, as the Smooth Fox Terrier’s head is more V-shaped than the Wire’s. Although both were originally classified as sporting dogs because of their excellent nose, sharp eyesight, and stamina in bolting foxes out of their holes. However, despite how similar the two breeds are, some experts believe that the two developed very differently, even from different ancestries. They claim that Wires are thought to have descended from the broken-coated and tan terries from Durham, Wales, and Derbyshire, while the original Smooth Fox Terriers were thought to be a mix of black and tan terriers with smooth coats, Beagles, Bull Terriers, and Greyhounds.

Furthermore, in the late 18th-century fox hunting became popular in England, both as a sport and as a necessity to protect farms. British hunters quickly discovered that they needed a dog that could enter the foxes’ dens and bolt the foxes out of their hiding places. The Smooth Terrier was developed and perfect for the job. While the breeders did not keep many records about how they developed the breed, we know from a portrait painted in 1790, by Sawrey Gilpin, of Colonel Thornton’s dog, that the breed we know today has changed very little from the 18th century Smooth Fox Terrier. Moreover, well-known Smooths of the 19th century also contributed to the breed’s development, such as Old Jock, born in 1859 at Grove Kennel in England, and by the late 19th century the uniform type has been established. At the end of the 19th century, the  Smooth Fox Terriers also entered the show ring about 15-20 years earlier than Wire Fox Terrier, and first, they were classified as sporting dogs. In 1876 England’s Fox Terrier Club was founded, with members drawing up a breed standard that stayed the same for decades only with the exception of reducing the weight of a male dog in show condition from 9kgs to 8kgs. A few years later in 1897, the breed was also imported into the US and the American Fox Terrier Club was founded in 1885. This club holds the distinction of being the first specialty club to become a member of the American Kennel Club. The first Fox Terrier to be registered by the AKC was Cricket in 1885. The AFTC adopted the English breed standard when it was formed and it wasn’t until a century later that they separated the two terriers as standard breeds. By the 1920s, the Smooth Fox Terrier became one of the most recognized purebred dogs in America when RCA used a picture of the breed in its logo, listening to a record machine with his head cocked in an endearing fashion. The film series called The Thin Man also contributed to the breed’s popularity as a Fox Terrier named Asta was regularly in the show.

In 1985, the American Kennel Club formally recognized the Smooth Fox Terrier and the Wire Fox Terrier as separate breeds, but the standards for both are still maintained by the American Fox Terrier Club.  The Smooth Fox Terrier is still not a very common breed, ranking 102nd among the 155 breeds and varieties registered by the AKC, but they are still stars in the show ring. Overall they are very clever, energetic, and plucky little dogs who love to be around people and also bond quickly with their owners.

Sharing is caring.
Help our free service by spreading information about dog breeds.
Link to this: Smooth Fox Terrier Breed Information
<a href="https://dogell.com/en/dog-breed/smooth-fox-terrier">Smooth Fox Terrier Breed Information</a>
Despite the best intentions, there may be errors. If you find one, please let us know and we will fix it as soon as possible. Contact us here.