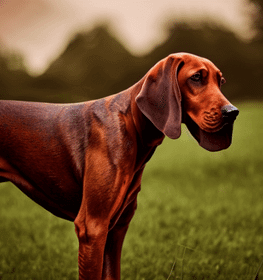 Collection of all the general dog breed info about Redbone Coonhound so you can get to know the breed more.

Redbone Coonhound As a Working Dog

The Redbone Coonhound is descended from handsome red foxhounds brought to America in the late 18th century by Scottish immigrants. The breed is also originated from Red Irish Foxhounds that were imported during the Civil War in America. Redbones are one of the six hounds developed by American settlers with an aim to provide a steady source of meat and fur for the immigrants during the new nation’s expansion to the south and west. The majority of the breed’s development took place in the South-eastern United States, especially in the state of Georgia. The Scottish foxhounds were bred for their raccoon-hunting capabilities and were eventually crossed with Irish hounds, moreover around 1840, possibly with Bloodhounds, which led to the Redbone Coonhound we recognize today. By the late 18th century, some of the coon hunters began breeding for faster dogs that were swifter at locating and faster at treeing raccoons. Therefore, the Redbone is widely used and acclaimed for its speed and agility from lowlands to steep rocky hills.

Initially, the Redbone’s coats featured a black saddleback streak, however, throughout the years of breeding their fur evolved into the notable red color. Contrary to popular belief, the breed did not get its name from its looks, the name actually derives from the name of an early breeder, Peter Redbone of Tennessee. Although, the United Kennel Club credits Peter Redbone's contemporary, George F.L. Birdsong of Georgia, and Dr. Thomas Henry in the 19th century.  Redbone breeders, for several years, but more attention on creating a nearly solid-colored, flashy, red dog, bred also for their appealing exterior looks.

At the end of the 19th century, the Redbone Coonhound became a well-established and detailed breed. They have continued to act as loyal companions and excellent hunters. Over time, breeders followed a selective and well-planned program that led to a Coonhound that was adept at treeing wild-game, agile enough to track in the mountains or in the marsh, could swim if necessary, and was courageous enough to go against larger animals such as bear and mountain lions. The breed is ideal for pack hunting both larger and smaller prey. The Redbone Coonhounds are usually portrayed in pop culture as lazy old dogs, snoring and snoozing away their lives on the front porch, nonetheless, this cannot be farther from the truth, because Redbones are among the most tenacious and tireless breeds.

In 1902, the Redbone Coonhound was recognized by the UKC (United Kennel Club) and more than 100 years later, in 2009 the breed got accepted by the AKC (American Kennel Club). Nowadays the breed is still rare outside of North America.

How old is my Redbone Coonhound in human years?