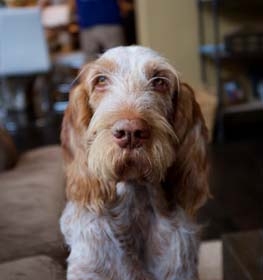 Collection of all the general dog breed info about Spinone Italiano so you can get to know the breed more.

Spinone Italiano As a Working Dog

The Spinone Italiano is one of the oldest breeds of gundog. The breed was developed way before written records were kept of dog breeding, so we can’t possibly know all of the breed’s history. Additionally, most of what currently touted to be fact is actually just speculation or a myth. One thing on which all researchers agree is that the breed is definitely native to Italy and is most likely developed into its current form millennia ago in the Piedmont region. Furthermore, the limited evidence, which is available for historians, also suggests that the Spinone Italiano may have been developed almost to its modern form by the early Renaissance, although some experts believe that it may have developed as long ago as 500 B.C. However, there is still an ongoing debate between dog experts as to how to best classify the breed. Usually, this breed is commonly placed in the Griffon family by many people, a group of wire-haired scent hounds and gundogs native to Europe. In fact, the breed is often suggested to be the ancestor of that entire group. On the other side, other experts claim that the breed is more closely related to giant wire-coated coursing breeds of the British Isles, the Irish Wolfhound, and the Scottish Deerhound. Until new genetic or historical evidence comes to light, this mystery will probably remain unsolved.

Moreover, the first descriptions of a wire-coated hunting dog in Italy came around 500 B.C. The Italian standard for the Spinone claims that the famous ancient historians Xenophon, Faliscus, Nemesianus, and Seneca all included the breed in their works over two thousand years ago. However, these writers were obviously not describing the modern breed, but rather its ancestors.

Apparently, the Celts were known to have a number of wire-coated hunting dogs, in Gaul, which consisted of modern-day France and Belgium, the breed was known as the Canis Segusius. As we know, the Celts were the primary inhabitants of large portions of what is now northern Italy before being conquered by the Romans, so it is possible to say that the Italians first acquired these dogs from the Celts at the time.

Furthermore, an interesting point which adds to the confusion to deciphering the true origins of the breed is that there is no further mention of this type until after the beginning of the Renaissance around 1400 A.D, leaving a huge gap in the Spinone Italiano’s historical record. However, with the beginning of 1300-1400, things began to change, for example, it was also around this time that guns were first being used in hunting. This necessitated the creation of new breeds as well as the modification of old ones to create dogs with the current canine skills necessary to work alongside now armed hunters. At the beginning of the 15th century, the Spinone Italiano reappears in the historical records in the painting of the Italian artists. The dogs shown are remarkably similar to the modern Spinone and are almost the exact same breed. Some famous painters to include the breed in their works were for example Mantenga and Vecellio. It is also very likely that the wealthy aristocracy and merchant classes of Italy used this breed while bird hunting. However, because of the gap in their history, there is debate whether the breed depicted in the Renaissance painting is the same mentioned by the ancient historians. Some researchers claim that the Spinone is descended from the now-extinct Spanish Pointer but others, especially French experts, claim that the breed is a mixture of several French Griffon breeds. Some even think that the breed comes from the rough-coated Russian Setters, but there is no evidence to back up any of these suggestions.

Actually, the first written mentions of a modern Spinone Italiano came from around the 1680s when the French author, called Selicourt wrote: “La Parfait Chasseur” (the Perfect Hunter” in which he described a breed native to the Piedmont region of Italy. Moreover, the breed gets its name from a thorn bush, the Pino which is a favorite hiding place of many species of small game. The name Spinone was not officially used until the late 1800s and before that time the breed was also known as Spinosos in most areas.

The Spinone had an important role during WWII as the Italians used the breed to track the German troops they were fighting against. However, even though this breed served heroically, WW II was just as devastating for the Spinone Italiano as for any other breed. Several events contributed to the decreasing numbers of the breed such as new breeds developing, the world wars, and also eventually its breeding ceased as people were not able to hunt and by the end of the wars, the Spinone was almost extinct. Not much later a Spinone lover called Dr. Ceresoli toured the entire country trying to find out how many fogs had survived. He discovered that a few breeders were forced to cross their dogs with other continental wire-coated gun dogs, such as the Boulet, the Wirehaired Pointing Griffon, and the German Wirehaired Pointer. Although the breed remained uncommon, Ceresoli tried to do everything to preserve the breed’s original form.

The first type began to arrive in the United States at the end of the 10th century and eventually the Spinone Club of America was founded to protect and promote breed interests. In 1995 the UKC became the first kennel club to grant full recognition to the breed. The AKC followed after 5 years placing the breed in the sporting group.

How old is my Spinone Italiano in human years?