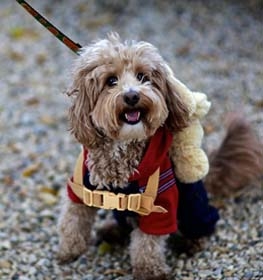 Collection of all the general dog breed info about Westiepoo so you can get to know the breed more.

Westiepoo As a Working Dog

The Westiepoo is a relatively new designer dog breed, that was developed towards the end of the 20th century when hybrid breeds became popular. Resembling any other designer dog breed, the Westiepoo’s development and the reasons behind it are more or less unknown, due to the fact that there is very minimal documentation available. Yet, it is most likely that, like any other hybrid breed, the Westiepoo was also created in North America at the beginning of the 1970s.

The Westiepoo, also known as the Wee-Poo or the Westiedoodle, is a result of cross-breeding either the Miniature or the Poodle">Toy Poodle with the West Highland White Terrier. The main reason behind the cross-breeding of these two breeds was the aim of enhancing both of the parent breed’s best characteristics, traits and while eliminating the less desirable characteristics combined in one ultimate little companion. Regarding the two-parent breed’s history, it is no doubt why the Westiepoo came to being. On one hand, the Poodle, which usually served as the basis of multiple cross-breeding processes, is a very old breed, that finds its origins in France dating back to the 1700s. According to common beliefs, the breed was first used as a gun and hunting dog, but later on, the nobility started to keep the dogs as pets. On the other hand, the West Highland White Terrier was bred to be a hunting dog against vermin and other rodents. The breed is originated in Scotland, and it is closely related to other Terrier breeds from that region including the Skye, the Cairn, and the Scottish Terriers. Both of these parent breeds are recognized by the major kennel clubs.

Keeping in mind the fact that the Poodles breeders used, came in two different variations, the Miniature, and the Toy, thus the Westiepoo also could appear in two different sizes, the medium and the miniature. Moreover, resembling other new designer breeds, most of the Westiepoo specimens are first-generation ones, meaning that their parents are purebred dogs. This is the reason why puppies from the same litter can have different physical characteristics and behavioral traits. Consequently, breeders aim for the standardization of the Westiepoo, focusing on multigenerational breeding of Westiepoo puppies. Meanwhile, other breeding practices are making efforts in order to perfect the Westiepoo’s qualities, by adding more Poodle or more West Highland White Terrier genes into them. No matter which practice we look at, breeders’ ultimate aim is to create a fully separable breed, that will potentially gain recognition from the major kennel clubs.

Today, designer breeds are very fashionable, because of their diverse characteristics. The Poodle’s hypoallergenic coat is also helped boost the popularity of any hybrid breed containing Poodle. The Westiepoo is mostly kept as an intelligent, active, and playful family companion.

How old is my Westiepoo in human years?