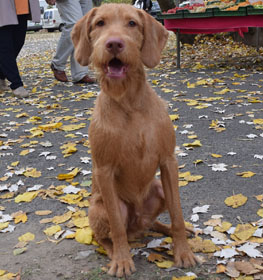 Collection of all the general dog breed info about Wirehaired Vizsla so you can get to know the breed more. 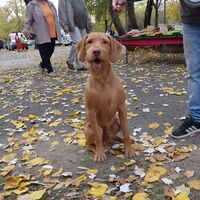 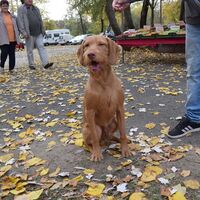 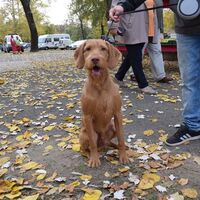 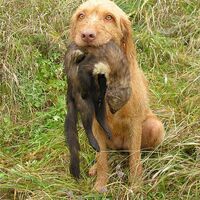 Wirehaired Vizsla As a Working Dog

Although the Vizsla’s history is said to go back many centuries, the Wirehaired Vizsla is a relatively recent development. The breed originates from Hungary in the 1930s, and as it is a dog that developed in the 20th century, experts know much more about the details of how the Wirehaired Vizsla was created.

They were developed by hunters and falconers who wanted a sturdy dog with a tough, wiry coat that could be somewhat protective against the rough field conditions and harsh winter weather found in northern Hungary. They submitted a plan for creating such a dog to the Hungarian Vizsla Klub. After much controversy, the plan was accepted, on the condition that the Vizsla’s inherent qualities and distinctive golden-rust coat color would be preserved. The primary difference would be the coat’s length and texture, which would be long and wiry. Moreover, to create the breed, smooth Vizslas were crossed with a German Wirehaired Pointed. Apparently, it was developed by Vasas Jozsef, owner of the Csabai Vizsla kennel along with Laszlo Gresznarik, who owned the de Selle German Wirehaired Pointer kennel. Two Vizsla bitches, Zsuzsi and Csibi, both of whom combined excellent pedigrees with good working ability, were selected to breed with a totally liver-colored German Wirehaired Pointer. Zsuzsi’s sire was known to have offspring with longer coats. The best of Zsuzsi’s and Csibi’s offspring were selected and bred together and Dia de Selle, the first Wirehaired Vizsla to be exhibited was born. She had the same body as a shorthaired Vizsla, but her head was the shape of the German Wirehaired Pointer. While her coat was not rough and thick enough, she was the promising beginning of the creation of the new breed. The breed is a versatile, natural hunter endowed with an excellent nose and above-average trainability. Although they are lively, gentle and mannered, demonstrably affectionate, and sensitive, they are also fearless and possessed of a well-developed protective instinct. The breed also has a firmness on point, is an excellent retriever, and has a determination to remain on the scent even when swimming. However, World War II resulted in the reduction of the populations of Vizslas and Wirehaired Vizslas so because of this they were further crossed with a Pudelpointer, a Wirehaired pointing Griffon, an Irish Setter, and possibly a Bloodhound.

How old is my Wirehaired Vizsla in human years?