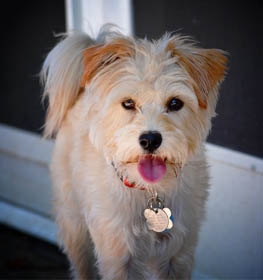 Collection of all the general dog breed info about Yorkipoo so you can get to know the breed more.

Like many designer breeds, the Yorkipoo is quite a young hybrid dog that has been popular for about 20-30 years. The breed was originally developed to create a toy-sized dog who had a hypoallergenic coat and was free of the genetic disorders that affected the parent breeds, the Yorkshire Terrier and the Toy or Miniature Poodle. To be able to really understand the history of the Yorkipoo dogs, we need to look at their parent breeds for more information.

The Yorkshire Terriers have been around for centuries. At the time of the Industrial Revolution, Scottish workers brought their small terriers with them to Yorkshire when they migrated to England. The small size of the breed made them the perfect candidate for hunting rats and other rodents that were common troublemakers in textile factories. Fortunately, the Yorkshire Terriers didn’t say in the working world for long. In 1886, the breed was recognized by England’s Kennel Club, and not long after they became favored by wealthy English ladies and gained a reputation as lapdogs, something they are still widely known for to this day.

On the other hand, the Toy Poodles started off as standard Poodles and originated in Germany as water retrieving dogs. Thanks to their curly, waterproof, low-shedding coats, high intelligence, and talents in swimming, they are often crossed with other breeds. They became very popular, especially in France, like duck hunting dogs. However, the Poodle moved from being a working dog to a more elegant companion in France. Later it developed its more distinct look when noble ladies wanted to carry around their little dogs as pets and this brought about the breeding of Toy and Miniature Poodles.

Moreover, both the Yorkshire Terrier and the Toy Poodle have defining appearances that have little question about their breed, but the same cannot be said for the Yorkipoo. As a mixed breed, it can take on characteristics of either parent breed and may favor the Yorkie or the Toy Poodle more. Either way, it is difficult to predict exactly what each Yorkipoo puppy will look like as it grows into an adult dog. As far as size goes, the Yorkipoo is expected to fall anywhere the sizes of the two parents. The breed’s coat will almost always belong and soft, but it may also be curly, straight, or a wavy mix somewhere in between. The color, is again, just as unpredictable as Yorkipoos have known to display a wide range of colors, including black, black and white, black and tan, red and white, apricot, and even tricolored. There are no breed groups or registries for the Yorkipoo, but efforts have begun to create a direction for all Yorkipoo breeders.