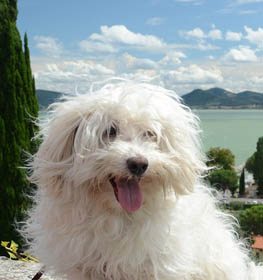 Collection of all the general dog breed info about Bolognese dog so you can get to know the breed more.

Around 2400 years ago little and precious white dogs, were introduced to Greece and many other Mediterranean countries by sailors from the Isle of Malta, as both  Plato and Socrates mention. They were little, with a black nose, eyes, eyelids, and lips, and had a white body. Those dogs were the forefathers of modern Bichon breeds, which include the Bolognese, Havanese, Coton de Tulear, Maltese, and, of course, the Bichon Frise.

The Bichon and Coton de Tulear are the product of the French modifying this small white dog. The Havanese originates in Havana, Cuba, and the Italians, with their typical flair for beauty and fashion, “created” the breed of  Bolognese with its special non-curly, non-wavy, but not straight hair either.

During the Renaissance, the Italian nobility made the breed popular by presenting puppies as gifts to other noble families. They were regarded as the most regal of gifts given by one aristocrat to another. They were treated as a symbol of wealth and were often spoiled, powdered, and perfumed.

Between 1328 and 1708, the Gonzagas,  who were a noble dynasty ruling parts of Italy, at the time were known to have bred the Bolognese on their own estates.

The love for this breed  and their status as a symbol of wealth spread from Italy  into Russia,  all around Europe, and other countries as well, of course firstly into the royal families

Queen Maria Theresa of Austria adored her Bolognese puppy so much that she had its body preserved and mounted by a taxidermist. It is still on display at Vienna's National Museum of History. Phillip II and Catherine the Great of Russia were among their admirers too. Other famous Bolognese parents were Da Vinci and  Madame de Pompadour. They've also been featured in tapestries created by Flemish artisans since the 17th century. Titian, a Venetian painter, used his Bolognese to depict the Spanish Duke Federico. Goya, Gosse, and Watteau also depicted the Bolos.

In more recent times, Marilyn Monroe was given a small puppy that Frank Sinatra had purchased from an Italian breeder. Because this breed was unknown in the United States in the early 1950s, some assumed he was a Poodle. Because of Sinatra's well-known ties to the Mafia, Monroe named the small puppy Mafia, or Maf for short. Marilyn Monroe was with Maf on the night she was slain, and her agent's secretary adopted her.

As the aristocracy's popularity and authority started to decline, so did the representation of this breed. A small group of volunteers of the fans of the breed helped it survive near extinction. Over the last two decades, breeders in Italy, France, and Holland have worked tirelessly to preserve the breed. Anyhow even if not as much as around the nobilities of old times they are enjoying great popularity in the eye of the public until today. 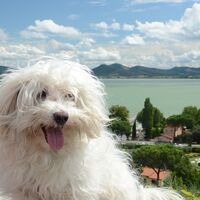 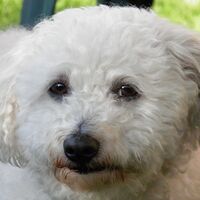 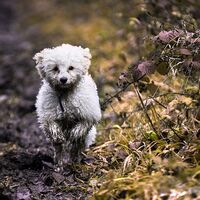