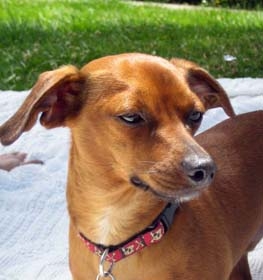 Collection of all the general dog breed info about Chiweenie so you can get to know the breed more.

Chiweenie As a Working Dog

Designed crossed-breed have only rea dogs really become more popular in the last two decades, and their names usually sound strange and cute like Chiweenie, Cavapoo, or Yorkipoo. Although these names may sound silly they actually make sense, usually, they allude to the breeds they are designed from.

The name ‘Chiweenie’ doesn’t quite give you an immediate idea of what breeds the dog is mixed from like Labradoodles and Schnoodles. This designer breed of dog is actually a mix of the Chihuahua and the Dachshund. As Chiweenies are quite a recent mix, so let’s get into the origins of their ancestry to find out more about them.

Chihuahuas are the world’s smallest breed of dog, at least this is sure about them, unlike its ancestry, which is quite chaotic. At first, they were believed to have originated from Mexico. The Chihuahua’s ancestor was a breed called Techichi, which hails from Central or South America.  On the other hand, there are others who think that Chihuahua was first bred in Asia instead. They believed that the  Techichies were larger dogs and that they only gained their smaller size after being crossbred with Asian hairless dogs.

Although the earliest depiction of the Chihuahua dates back to the 9th Century CE according to historical records they only became popular in the US, with the American Kennel Club classifying the breed as belonging to the toy group in 1904.

While the purpose of the Chihuahua breed isn’t known, the story of the Dachshund is very different. Dachshunds have a long history that is traceable all the way back to the 15th Century. They were introduced in the US during the late 1800s. However, it was later in 1935 that the American Kennel Club inducted this breed into the hound group.

These dogs were designed and bred in Germany primarily for hunting. Their main prey was badgered and this is where the name came from. ‘Dach’ in German means ‘badger,’ while ‘hund’ means ‘dog.’They weren’t just used for badging but also for hunting den animals, because their short legs made it easy for this breed to dig its way into tunnels created by them. Packs of Dachshunds were also used to trail wild boar because thank their strong backs they can withstand the force of all that digging.