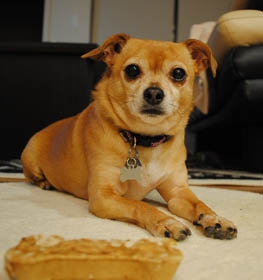 Collection of all the general dog breed info about Chug so you can get to know the breed more.

Chug As a Working Dog

The Chug is a relatively newly developed designer dog breed, which was created, possibly in North America. The trend of creating new hybrid breeds began around the middle of the 1900s, in North America and in Canada, with cross-breeding purebred dogs with each other, in order to create new, hybrid breeds. These hybrid dogs were an instant hit because they always inherited the best and most desirable qualities and traits of the parent breeds, thus they usually suited better to their owner’s needs. Unfortunately, this popularity does not mean, that we are certain about every detail of these hybrid breed’s ancestry, and the intention which led the breeder to develop these dogs.

Even though many sources state, that the Chug might have existed naturally over the years, by the result of an accidental mating between the Chihuahua and the Pug, the first planned cross-breeding happened in the early 2000s. In order to gain a better understanding of the reasons why the Pug and the Chihuahua were mixed with each other, it is advisable to examine both of the parent breed breeds’ histories. Both of the breeds have long and extensive ancestries, and both of them are long recognized and registered by most of the kennel clubs and organizations. The Chihuahua is considered to be originated from the now-extinct, so-called Techichi dog, which was indigenous to South America. Wall cravings depicting a dog resembling the Chihuahua from the Tolec people were also detected in South America. After the Aztecs conquered the Tolec tribes, they also took their dog, the Chihuahua, and started to develop them more in order to better suit their needs. According to Aztec mythology, the Chihuahua possessed special powers, with which they could accompany and guide their owners in the afterlife. After their owners passed, the dogs were buried or cremated with them, in order to keep their strong bond. Another theory suggests that the Chinese people brought the Chihuahua to Mexico during the late 1850s, thus this theory indicates that the Chihuahua is not really an ancient breed. On the other hand, regarding the other parent breed, the Pug’s history can be traced back to 206 B.C., to the Buddhist temples in Tibet. It is believed that the Pugs were brought to Tibet from China, where the dogs were considered to be and treated like royalty. Pugs were later exported by Dutch traders to Europe. Later, as the Pug became more and more popular in the Western countries, it was further developed by adding several Bulldog breeds to the Pug’s gene pool, with the intention of establishing a more unique and distinguishing physique.

Interestingly, the Chug is one of the few hybrid breeds that have no Poodle in their lineage. The Chug combines all the wonderful traits and capabilities of its parent breeds. From the Chihuahua, the Chug inherited their playfulness, affection, and loyalty, while the Pug gave the Chug a more robust, and stronger appearance. However, unfortunately, most of the Pugs suffer from several breathing and nostril problems due to their skull structure. Furthermore, there are certain unpleasant characteristics of the Chihuahua too, including their occasional aggressive behavior and their yapping nature. These negative characteristics might also appear in the Chug puppies, for the reason that breeders did not manage to eliminate these problems just yet.

Just like other designer breeds, the Chug is solely recognized by the American Canine Hybrid Club, the Designer Breed Registry, the Designer Dogs Kennel Club, the Dog Registry of America, Inc., and the International Designer Canine Registry.

How old is my Chug in human years?

Sharing is caring.
Help our free service by spreading information about dog breeds.
Link to this: Chug Breed Information
<a href="https://dogell.com/en/dog-breed/chug">Chug Breed Information</a>
Despite the best intentions, there may be errors. If you find one, please let us know and we will fix it as soon as possible. Contact us here.