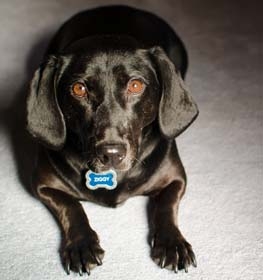 Collection of all the general dog breed info about Dachsador so you can get to know the breed more.

The Dachsador is a hybrid breed but it is unknown where the breed originated from. It is believed that the Dachsador was developed as a result of designer dog trends that have appeared in the last two decades. The breed was created by the combination of the Dachshund and the Labrador Retriever. While the Dachsador’s history is unknown, some people believe that the breed was initially developed in order to help eliminate health diseases in the parent breeds.

Moreover, the breed does not have a standard and will vary depending on the litter. The breed has a dense, rough, wiry, and water-repellent coat that stems from the Dachshund’s traits. The Dachsador, like the Dachshund, has a body that is longer than tall. His petite stature is ideal for herding. Like the Dachshund, the breed has a pointed nose and short, angled ears. His legs are tiny and stubby, and they stand parallel to his chest. His physique is athletic and muscular.

However, to understand the history of this breed, we need to look at the history of the parent breeds. The Dachshund originated in Germany as a hunting dog, though its origins can be traced back as far as the 15th century, the breed’s development really began in the 17th century. As the breed name suggests, meaning “badger dog”, the Dachshund was developed to enthusiastically dig his way into a badger den and dispatch its occupant. The breed’s long, low body was custom-made for this dirty subterranean work. They were also famous for their bravery during boar hunting. Moreover, the Dachshund has long been the national symbol of Germany, so closely associated with the fatherland that during World War I, American fanciers named them Liberty Hound due to the anti-German sentiment. They became popular as companions and eventually made their way to the United States, but were not sought after there because of their German ties. After World War II, however, the Dachshund became an adored family pet. The breed was already recognized by the AKC in 1885.