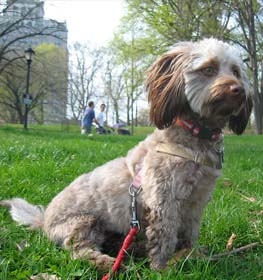 Collection of all the general dog breed info about Doxiepoo so you can get to know the breed more.

Doxiepoo As a Working Dog

The Doxiepoo, also known as the Doxiedoodle, Dachshundpoo, or Dachshunddoodle is a designer dog breed, that is thought to have been developed during the early 21st century, during the time, when the demand for Poodle crosses became increasingly high. The trend of creating new hybrid breeds started around the middle of the 1900s, in North America, with crossbreeding purebred dogs with each other, in order to create new dogs, which better-suited people’s different lifestyles. These hybrid dogs were an instant success, thanks to the fact that they always inherited the best and most desirable qualities and traits of their parent breeds. Unfortunately, this popularity does not mean, that we are certain about every detail of these hybrid breed’s ancestry, and the intention which led the breeder to develop these dogs.

In comparison to the other designer breeds, the Doxiepoo, being a result of combining the Dachshund with the Poodle initially seemed a little different and random. Unlike many hybrid breeds, where there is a minimal similarity between the two parent breeds, the Dachshund and the Poodle could not be more different from each other. Regarding one of the parent breeds, the Poodle can trace its origins back to Germany and France back to the 16th and 17th centuries. After the Second World War, the breed became number one in the United States of America, and their cross-breeding with other breeds have started. The Poodle comes in three different sizes, the Standard, the Miniature, and the Toy, and the breed also comes in multiple different coat colors. On the other hand, the Dachshund is also originated from Germany, where it was used as hunting companions for smaller games. Furthermore, the Dachshund also comes in different sizes, many coat colors, and three different kinds of coats.

Due to the variety of physical attributes the two parent breeds are possessing, it is always a surprise how a litter of Doxiepoos will look like. For this reason, there is little consistency even between the second-generation crosses. Resembling other designer breeds, breeders developed the Doxiepoo, in order to promote the parent breeds’ virtues, while decreasing or fully eliminating their less desirable qualities. Despite the effort, the opposite happened in multiple cases. Many dogs inherited the misbehavior towards strangers and the stubbornness of the Dachshund combined with the sensitivity and restlessness of the Poodle. Moreover, both of the parent breeds suffer and prone to many diseases, which the mixed puppies can inherit. Furthermore, due to the increasing demand for Poodle mixes, like the Doxiepoo, many unlicensed and unethical breeders started puppy mills, which risks the health of the whole pedigree stock.

Today, the Doxiepoo is simply kept as a family companion, but the breed is far from being the most popular Poodle mix out there. Besides, just a few kennel clubs recognize the Doxiepoo, including the American Canine Hybrid Club, due to the fact that there is not even a little consistency between the specimens. Breeders aim to eventually write up a breed standard, but the Doxiepoo is very far from that, in reality.

How old is my Doxiepoo in human years?