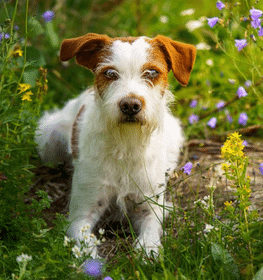 Collection of all the general dog breed info about Kromfohrlander so you can get to know the breed more.

Kromfohrlander As a Working Dog

The Kromfohrländer dog, also known as the Länder or Kromi, is a sweet-natured family pet. The Kromfohrländer is a relatively young breed that is highly rare and at serious risk of extinction, despite the ongoing breeding program.

They have been bred as companion animals since the beginning, though they do have a weak predatory drive.

The Kromfohrlander (Krome-fore-lahn-dair) is a medium-sized dog breed that was developed in Germany in the 1940s and 1950s.

As in the case of most breeds, the two World Wars were hard to survive, and the Kormi is no exception. A lot of great breeds went extinct in those days but luckily the Kromfohrlander was not among them.

These dogs interbred with other breeds over the 6 years of World War II and some were adopted by American soldiers to keep them company and be a reminder of home.

During WWII, US President Franklin D. Roosevelt decided to travel with his dogs (an Irish Setter and a Scottish Terrier) which was considered an unnecessary expense by his advisors by the way.

Soldiers saw this as permission to bring their own therapy animals to camp and on the battlefield and did so.

Bringing therapy animals to the camp gave psychological help to the soldiers during those tragic and trying times.

The USA army adopted a little, brown, wiry dog known as 'Original Peter' as a mascot dog who is probably the ancestor of the Kromfohrlander breed.

American troops are claimed to have discovered him in France and carried him to Germany as a good luck charm. The plot becomes fuzzy at this point.

According to some reports, he leaped off a moving train and was adopted by a local woman.

Others believe he was saved by this woman as he was being hunted down by a gang of ruthless Germans. Either way, Ilsa Schleifenbaumn was the lady who rescued him, whatever his roots is.

Original Peter, she believed, was a Griffon dog, though the exact type of Griffon is still questioned today. Isla Schleifenbaumn has contributed a lot to the development of the breed.

She bred Peter with the neighbor’s dog an American Fox Terrier called Fifi. The resulting puppies are thought to have been bred to a combination of Terriers and Griffons, resulting in the Kromfohrländer.

There are a lot of questions surrounding the exact ancestry of the Kromfohrlander.

Briquet Vendeen, English White Terrier (the foundation of Parson Russell and Fox Terriers), Poodle, Beagle, Berger des Pyrenees, Schnauzer, and Brittany are examples of possible breeds that would have contributed to the creation of the Kromfohrlander (that could survive on their own during the war and actually existed in that part of northern France at the time).

Natural tendencies to hunt or herd were repressed through generations, resulting in a breed with a moderate to low hunting instinct and the strong loyalty and sensitivity of a much smaller companion dog.

The German Kennel Club and the FCI recognized the Kromfohrländer in the show ring not long after their development, in 1955. Ilsa Scleifenbaumn contributed a lot, as it is already mentioned above to the creation of the breed standard.

The UKC recognized the breed in 1996. The Kromfohrländer, which is currently in the American Kennel Club Foundation stock, is part of a breeding program focused on improving the minor breed's population.

Adopting a Kromfohrländer is now extremely tough, though maybe this will change in the future. The breed is currently found in Germany, Austria, Scandinavia, and the United States.

How old is my Kromfohrlander in human years?