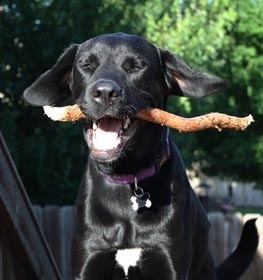 Collection of all the general dog breed info about Labradane so you can get to know the breed more.

Labradane As a Working Dog

The Labradane is a hybrid dog breed, a cross between the Labrador Retriever and the Great Dane. The breed came about during the designer dog craze in the 1980s. Some accounts suggest that the dog’s origin was an attempt to tap into the trend of owners who wanted smaller-sized canines, rather than giant breeds like the Great Dane.

Moreover, when it comes to Labradane’s parent breeds, drawing of dogs who look like Great Danes have been found on Egyptian artifacts dating back to 3000 B.C. and in Babylonian temples that were built around 2000 B.C. According to experts, there is evidence that similar dogs originated in Tibet, with written reports of such dogs appearing in Chinese literature in 1121 B.C. The Assyrians, who exported their canines to the Greeks and Romans, are said to have spread the breed around the world. These dogs were later crossed with various breeds by the Greeks and Romans. The English Mastiff’s ancestors were most likely engaged in the creation of the breed, and others believe that the Irish Wolfhound or Irish Greyhound may have also played a role. Great Danes were originally known as Boar Hounds because they were raised to chase boars. Their ears were cropped to prevent boar tusks from tearing them. The name of the breed was altered to “English Dogges” in the 16th century. The name Great Dane arose in the 1700s when a French naturalist went to Denmark and saw a variant of the Boar Hound who was leaner and more like a Greyhound in appearance. He called this dog Grand Danois, which eventually became Great Danish Dog, with the more massive examples of the breed. Despite the fact that Denmark did not develop the breed, the name stuck. Most breed historians give credit to German breeders for refining the breed to be the well-balanced, elegant dog we love today. Throughout the late 19th century, German breeders continued to refine the breed. They turned their attention to the dog’s temperament because Great Danes had aggressive, ferocious temperaments due to the fact that they were originally bred to hunt wild boars. We don’t know when the first Great Danes were brought to the US, or even where they came from, but the Great Dane Club of America was formed in 1889, and it was the fourth breed club allowed to join the American Kennel Club.

Overall, the two parents made an excellent breed. The Labradane is likely to be a large or giant-sized dog depending upon the dominant parent breed. He will vary in color, maybe black, brown, and white, or he may be brindle, mantle, or solid. The breed loves being active and is very social, and affectionate with every member of his family.

How old is my Labradane in human years?