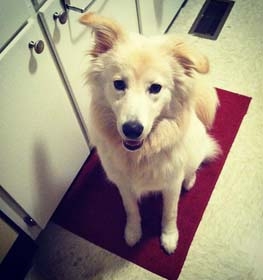 Collection of all the general dog breed info about Labsky so you can get to know the breed more.

The Labsky is a cross between the Labrador Retriever and the Siberian Husky. It is sometimes also called the Siberian Retriever, Husky Lab, or Huskador. (It is important to not confuse it with the Labrador Husky, which is a breed of its own, developed in the 1300s in Canada.) Similarly to most of the designed dogs, Labskies are bred since the 1990s. Their country of origin is unknown, because several breeders started to create Labskys at the same time independently of each other all around the world so it is impossible to tell who was the first.

But as opposed to itself the history of Labsky's parent breeds goes back a long way. The Siberian Husky is almost 3000 years old breed and originated in the Arctic. They’ve been brought to Canada and Alaska by humans from there. Traditionally, they have been used as sled dogs and hunters. They have always been good companion animals since they are generally gentle, friendly, and highly intelligent.

The origin of Labrador Retrivers date back to the 19th century. They firstly appeared in Newfoundland. These dogs were historically used as gundogs who worked on both land and water. The Labrador Retriever has topped the most popular pet list for more than 25 years and is still one of the most favorite family dogs anywhere in the world, but especially in the USA, due to its temperature. Labrador Retrievers are kind, protective, and good with kids. Even though they may seem lazy sometimes in reality, they are enthusiastic and energetic.

These pups inherited some of the best qualities from both of their parents, so they are active, smart, and loyal.

Sharing is caring.
Help our free service by spreading information about dog breeds.
Link to this: Labsky Breed Information
<a href="https://dogell.com/en/dog-breed/labsky">Labsky Breed Information</a>
Despite the best intentions, there may be errors. If you find one, please let us know and we will fix it as soon as possible. Contact us here.