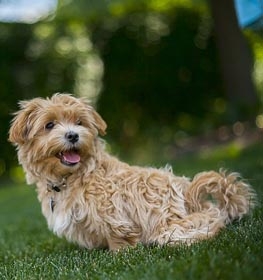 Collection of all the general dog breed info about Maltipoo so you can get to know the breed more.

Maltipoo As a Working Dog

When it comes to the Maltipoo and its history/origin, it is not that different from most of their mixed breed fellows. Although it is not officially a breed, it is one of the most famous of the Poodle hybrids developed over the past 20 years in the United States. The breeders’ intention was to create a small, cute, fluffy, and cuddly companion that would capture the hearts of many. The original breeders obviously hit their goal as we cannot deny that the Maltipoo is a great choice for almost any family.

This breed became the result of crossing the Maltese and the Toy or Miniature Poodle. Even though we have seen many crossed breeds before, this particular mix is somewhat new and we can say that it is part of the ‘designer dog’ trend. When the Maltipoo was devised, the demand for this so-called ‘designer dogs’ was already pretty strong due to the influence of celebrities, who started bringing their mixed breeds to social events in the 1990s. However, both the Poodle and the Maltese were already popular breeds, so crossing the two together was believed to bring out the best, as the personalities of both breeds would perfectly complement each other in their offspring. Moreover, as a hybrid dog, Maltipoo’s history includes the history of both the Maltese and the Poodle.

First, let’s start with the history of the Maltese. This breed is actually thought to be an ancient breed whose origins are not fully known. According to researchers the first record of the breed goes back to 600 BC and references to this type of breed can be found in the writings of Ancient Greek and Roman philosophers and other ancient poets and historians such as Aristotle. Back in the time, the ancient Greeks and Romans believed that the dog originated from the Island of Malta and called the breed “Canis Melitaeus” which means “ancient dog of Malta”. However, there is no evidence that would prove that the Maltese were indigenous to the Island of Malta, but rather some evidence suggests that the breed is descended from a Spitz-type of dog. The modern Maltese developed during the 17th-18th centuries when the breeders decided to make this type smaller in size.

On the other side, there is still a great debate on the Poodle’s origins but it is believed that they descend from the old French Barbet. In fact, the Poodle was popular as a duck hunting dog and eventually became the national dog of France. However, it is likely that they were first bred in Germany. Anyhow this breed actually consists of three types; the Toy Poodle, the Miniature Poodle, and the Standard Poodle. The Standard Poodle is the oldest of all and the Miniature and Toy variations were developed for those who desired smaller dogs. Despite their small size, the Toy and Miniature Poodles were also used as working dogs, especially desired for circuses because of their high intelligence and athleticism.

Overall, as we looked at the history of both parents of the Maltipoo we came to a better understanding of what the breed is like.