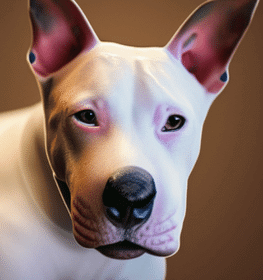 Collection of all the general dog breed info about Old English Terrier so you can get to know the breed more.

The oldest written use of the word ‘Terrier’ dates back to 1440, which shows that these types of dogs were already known in England at the time. However, some evidence shows that generally, they are much older than that. The word ‘Terrier’ originates back to the French term “Chein Terre” which means Earth and Ground dog. They received this name as originally they were used to catch small animals. Nobody knows exactly how the first Terriers were developed but some have developed theories and it is mostly agreed that they were developed within the confines of the British Isles from local breeds. They also suggest that the Terriers may share an ancestry with the Irish Wolfhound or Scottish Deerhound.

However they developed, they became popular among English farmers as their task was to kill the rats, mice, rabbits, foxes, and other pets that caused problems for the farmers. By doing so these dogs helped to increase agricultural yields and the farmers’ income. Although as time went by Terriers were considered miniature killers, aggressive to any creature which was the same size or smaller than them, energetic, athletic, and very pain tolerant. At one point there were dozens of distinct Terrier varieties found in Britain.

By the 18th century, the Old English Terrier was also known as the Black Terrier which moved into two types; the rough-coated and the smooth-coated Terrier. It was one of the oldest terrier breeds, which is now believed to be extinct and is said to be the ancestor of the Welsh Terrier and all Fell Terrier breeds. However we are not completely sure of its origin there have been several articles and books published about the subject such as Robert Leighton, who was writing early in the twentieth century in his book the Dogs And All About Them, published in 1914. He gave an admirable summary of the emerging and non-emerging breeds including the terriers of England as well and writes “A wire-haired black and tan terrier was once common in Suffolk and Norfolk, where it was much used for rabbiting, but it may now be extinct, or, if not extinct, probably identified with the Welsh Terrier, which it closely resembled in size and coloring.”

Even though the Old English Terrier is nowadays extinct, its blood continues in a number of other breeds like the Bull Terrier, Boston Terrier, Gull Terr, and Wire Fox Terrier, etc.

How old is my Old English Terrier in human years?

Sharing is caring.
Help our free service by spreading information about dog breeds.
Link to this: Old English Terrier Breed Information
<a href="https://dogell.com/en/dog-breed/old-english-terrier">Old English Terrier Breed Information</a>
Despite the best intentions, there may be errors. If you find one, please let us know and we will fix it as soon as possible. Contact us here.