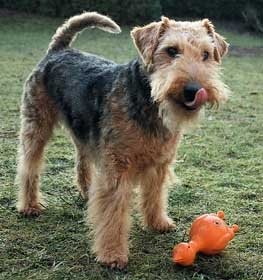 Collection of all the general dog breed info about Welsh Terrier so you can get to know the breed more.

Welsh Terrier As a Working Dog

The Welsh Terrier’s history is quite unclear, for the reason that most of the Terrier breeds came to life in the same period of time, around the turn of the 18th century. The breed finds its origins in the remote mountainous regions of Northern Wales. Initially, as other Terrier breeds, the Welsh Terrier was also bred for the purpose of hunting and controlling the vermin population around farms.

According to experts, the breed is a direct descendant of the now-extinct Black-and-Tan Terrier. Other modern Terrier breeds, like the Manchester Terrier, the Border Terrier, and the Lakeland Terrier are also considered to be derived from the Black-and-Tan Terrier. Initially, these descendant breeds were very similar, but as they evolved, due to the different breeding programs, they drifted apart quite slightly. These early breeding practices involved a lot of interbreeding and also cross-breeding which led to difficulties in determining the Welsh Terrier’s true origins. In order to distinguish the Welsh Terrier from the other breeds, breeders started to pay attention in order to enhance the breed’s hunting capabilities. The dogs were developed and used to hunt for foxes, badgers, and otters, going into their dens after they had been driven to the ground by the hound packs. With the intention of pursuing the prey, the dogs had to follow the animals in narrow confines in the dark and had to be tenacious enough to fight them to death when necessary. Consequently, breeders managed to create a breed that is brave, stoic, independent-minded, aggressive, and even oblivious to pain, on-demand. Moreover, the Welshmen who created the Welsh Terrier sought after a dog that could be trusted with their families, children, and livestock. This rigorous and severe requirement system resulted in the production of a breed with unique physical and behavioral traits.

The breed was commonly categorized as an Old English Terrier. It was not until 1885, that the Welsh Terrier was recognized as a separate breed by the Kennel Club of England. Later, in 1888 the breed got imported to the United States of America, where it instantly found its fanciers. At the beginning of the 19th century, the Welsh Terrier’s popularity began to grow, for the reason that the dogs were shown in rings.

Their popularity has been persisted to today, the breed constantly scores well at the major dog shows. The breed also got a major popularity boost, when famous people were acquiring them as pets, including the US President, John F. Kennedy, who owned a specimen named Charlie, while also Prime Minister, Clement Attlee was also devoted to the breed. King Edward VIII was also fond of the Welsh Terrier, and he owned one named Gwen who was well-known throughout Britain. In their native lands, the breed is still used as a sporting dog. Nowadays, as most of the Terrier breeds, the Welsh Terrier is kept as a loyal, fun, and loving family companion around the whole world. Yet, the Kennel Club considers the breed to be at risk, due to the fact that low numbers are being registered each year. The Welsh Terrier is also a good and frequent choice in creating hybrid dogs, because of their excellent characteristics. This also endangers the breed’s integrity and consistency.

How old is my Welsh Terrier in human years?