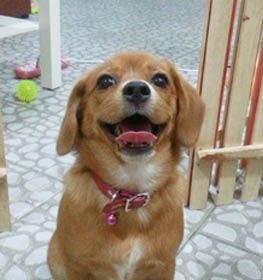 Collection of all the general dog breed info about Pomeagle so you can get to know the breed more.

The Pomeagle is a hybrid mixed dog breed, that is a result of crossbreeding the Beagle with the Pomeranian breed. Even though the dogs come in very different sizes, generally they are small, very intelligent, affectionate dogs thanks to the two-parent breeds’ best capabilities, looks, and behavioral traits.

Regarding the parent breeds’ history, the beagle’s origin is a little uncertain. In some places, there are records of the breed from as far back as ancient Roman times, although those dogs were not the Beagle we know today. Back then, they used the breed solely for hunting purposes, however, in the 18th century they fell out of favor because foxhounds gained more popularity and due to the fact that the Beagles were much slower than the hounds. Nonetheless, farmers continued to use and work with the breed. In the early 19th century they were imported to America and breeders started to work on them, and bred them smaller, than they were. As opposed to the uncertainties around the Beagle's origins, the Pomeranian got its name from the province where the breed comes from, Pomerania. Many of the breed’s dogs walked alongside many famous people including, Mozart, Martin Luther, Newton, and Michelangelo. Therefore, the breed became more popular among the richer classes in society and Queen Victoria also became fond of the Pomeranian. As a result of the breed’s successes, many breeders started to experiment with more fur colors. Later, in the 1880s the breed was imported to the United States.

In the early days of the breeding process, roughly in the 1990s, breeders had the intention to develop a new companion dog and minimize the health risks and issues that many pure breeds experience. The Pomeagle may have been existing naturally for over 20-30 years, but designers started planning a strict breeding program in the United States in the last 20 years. As the demand for these designer breeds increased, so did the creation of Pomeagles, and the breed got widespread all over the world.