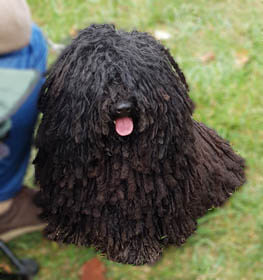 Collection of all the general dog breed info about Puli so you can get to know the breed more.

The Hungarian Puli is a cattle dog breed. Their trademark is the unique ribbon and tangled outer coat. A proper Puli coat might seem like a mop, as The New York Times once wrote. The Hungarian Water dog breed standard is the rounded head with a thick outer coat that is hardly separate from its body because its neck is virtually invisible due to its long hair. The soft wooly outer coat eventually cords after puppyhood. The long dense coat is heavy, but it doesn't decrease the dog's high energy level. A proper Puli coat consists of a coarse top coat and a finer undercoat. The breed standard is the advanced jaw and strong teeth. As the breed standard, their intersecting teeth are closed like scissors. His eyes are dark brown, looking intelligent, but the dense hair of the head covers the eyes as a shield. As a herding dog and a cattle dog, their sight is excellent. The Hungarian Water dog breed has wide hanging ears that are almost unnoticed from the ribbons of their coat. His back is straight and tight. As the breed standard, his tail is bent over his back, so it melts to his hair. The chest of this dog is long and deep, his belly is slightly raised. The Puli breed's limbs are well muscled, straight and parallel. The hind limbs also have good muscles. This makes the Puli a tireless and very high energy level herding dog. His paws are strong, round, black or grey.

In this Dogs 101 video, you can find a brief summary of the Puli breed information.

Is the Puli dog breed originated in Hungary?

It's impossible to find out exactly where it came from, but the drawings of a corded coat dog from the 1700s and written memories make it clear that this ancient dog breed of the Hungarians was this ribbon coated dog, probably the Puli. The name itself can easily come from the word poodle. The Hungarian Water dog can be a relative of the poodle, although the poodle wasn't a shepherd dog, it was a hunting dog. It's certain that the Hungarian ancestors had once come to Asia during their migration and the canine was brought to Hungary because they were the main helper of the people by being excellent herding dogs and cattle dogs. Their double coat makes them an ideal mountain dog as well. In the 1900s there was a turning point in the breed's life since the Puli was re-discovered, but not as a sheepdog. As the structure of agriculture changed, the tasks and the job opportunity of the Hungarian Puli decreased. Of course, this doesn't mean that they have completely lost their herding dog skills as a cattle dog, but the possibilities of their usage have been enlarged, as they became guard dogs and watchdogs.

After the World Wars, the Puli became unpopular. In the 1960s, Imre Ócsag started breeding the pooch again. There was a lot of debate about the color and size of the Puli breed, but ultimately the hues of today's colors and the breed standards set by the final breed standard were formed. The Puli coat varies mostly at white and black fur color. His popularity fell, which was good for him, as he wasn't an over-grown fashion dog.

The United States Department of Agriculture imported four purebred Hungarian Puli dog in 1935 to help American agriculturists concerned with the problem of shepherd dogs which often killed the animals so they started to lose control over them. The Puli was bred among themselves and crossed with the German Shepherd, the Chow Chow and perhaps with two Turkish herding breeds which were quartered there at the time. On the experiments and tests given by researchers there, Puli dogs scored between 75 and 85, where the other herding group scored in the range of 12 to 14. Because tests were inconclusive, they were never published. When World War II broke out, the Puli breed was sold off to professional breeders, and it's thought that it's from these four dogs and their descendants that history of the Puli in the USA began. This breed was accepted by the American Kennel Club (AKC) in 1936 and the Puli Club of America was founded in 1951. In 1972 it was an international exhibition where nearly a hundred Puli took part. It has become increasingly popular abroad. In the countries of Europe, America, Canada, and Australia, there are separate Puli clubs. The Hungarian government declared the breed as a national treasure in 2004 (including other Hungarian dog breeds like Komondor, Kuvasz, Mudi, Pumi, Hungarian Greyhound, Wirehaired Vizsla, Vizsla, and Transylvanian Hound).

Nowadays only a couple of hundred Puli puppies are registered each year in the USA. Although thanks to the Facebook founder Mark Zuckerberg, this herding dog becoming more and more popular today both in the United States and in Hungary, and hopefully in the whole world.

With Puli's popularity, it has become a protagonist for TV commercials in America.

And one more video:

Photo Gallery of the Puli Breed 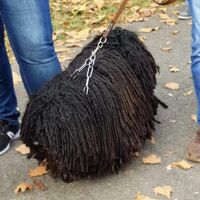 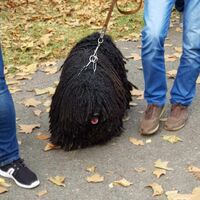 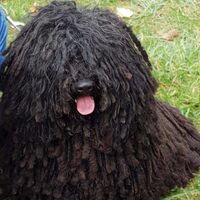 Sharing is caring.
Help our free service by spreading information about dog breeds.
Link to this: Puli Breed Information
<a href="https://dogell.com/en/dog-breed/puli">Puli Breed Information</a>
Despite the best intentions, there may be errors. If you find one, please let us know and we will fix it as soon as possible. Contact us here.