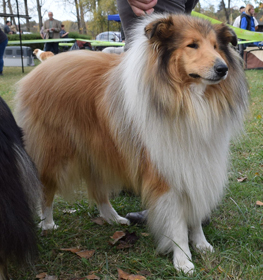 Collection of all the general dog breed info about Rough Collie so you can get to know the breed more.

The long-haired Scottish Shepherd dog is considered by many to be the world's most beautiful dog. Her head is long, tapering. Black nose, dark brown meaningful eyes. Ears small, pre-tearing. Tail hanging. Its elegant, graceful appearance and beautiful long coat is a truly eye-catching sight. In addition, this dog breed is not only beautiful, but it is also very intelligent: perfect for quick learning and a variety of tasks. We also know legendary loyalty from the story of Lassie's. His love for his child and for his master is really just like in the movie.

Rough Collie is cheerful with full of energy. The breed enjoys people's company, sensitive and devoted. Collies are strongly tied to their masters and don't bark much. The character of the Rough Collie dog from Eric Knight: Lassie Come-Home has become sympathetic to many readers. Collie's intelligence is extraordinary.

They notice and understand what is happening in the surroundings, so it's an excellent guard dog. Not only their hearing, but their sight is also excellent. He likes working, obedient, docile.

Purposes of the Rough Collie

Rough Collie can be especially recommended for families with children or where adults have an active lifestyle. Collie has great results in several dog sports. Besides their beauty, they're also excellent as a working dog and are easy to train. Recently, fewer and fewer copies have been trained, but they deserve more attention because of their good senses, workload, and dynamism. According to his fans, the Rough Collie can fight the most if necessary. Undoubtedly an incredibly loyal and pleasant companion.

Rough Collie As a Working Dog

This dog breed comes from Scotland, as its name suggests, an ancient Scottish breed. Its contemporary version of the Old English Shepherd Dog and the English Greyhound. In the 1800s, the commonly used black-colored sheep on the Shetland islands were called colley on the basis of the old English word black. The sheep-guiding dogs were simply called colley dogs, which became today's collie. For centuries they were used as herding dogs and later became world famous as a military medical dog. Many people like the breed because of their nice look.

English doctor called Johannes Caius wrote about the Collie nearly 550 years ago: "this kind of voice of his owner, whistling and seeing his whistle ... straying the stray sheep precisely according to his master's wishes. Forward or backward, right or left, or hold in place." In the mountains of Scotland, Collies were a great value. More people should have been used to guard flocks, drive them to the fair, and guide them to new pastures, and their wages would have consumed all the benefits of the leader. The Collie was later a well-known war-dog, messenger and guard dog. The Rough Collies's long, dense, weather-resistant coat was created by the cold climate of the Scottish West Highlands. Graceful shape, elegant appearance describes them.

In the history of the Scottish Shepherd dog, it was the turning point when Queen Victoria visited Balmoral in 1860. She immediately fell in love with the Collies. She bought home some copies the Royal Kennel in Windsor. The long-haired Scottish Shepherd was suddenly in the center of interest (alongside the Cavalier King Charles Spaniel), and the rich competed for the most beautiful specimens, even from the United States. For the first time in the history of dog breeding, the price of a puppy was equivalent to a small fortune: a single Scottish Shepherd dog paid £ 1,000 (around $ 2,400). At that time, they began to strive for a more elegant look. To achieve this, they allegedly used: Russian Greyhound and Gordon Setter but this is not proven.

How old is my Rough Collie in human years?