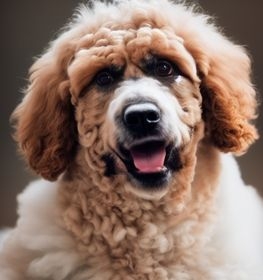 Collection of all the general dog breed info about Saint Berdoodle so you can get to know the breed more.

Saint Berdoodle As a Working Dog

The Saint Berdoodle is a new hybrid designer dog breed, that originates from two purebred parent breeds. The breed is a result of crossing Saint Bernard with the Standard Poodle. New hybrid dogs partly from the Poodle have been popular since the middle of the 20th century when the Cockapoo stole everyone’s hearts with its low-shedding coat, loving personality, and intelligence. Yet, the introduction of Saint Bernard is relatively fresh to the breeding programs.

The exact origin of the hybrid breeds is always surrounded by a lot of mystery. The trend of creating new hybrid breeds started around the 1980s, in North America, with crossbreeding purebred dogs with each other, in order to create new, more desirable breeds. Thus, there is no exact date that marks the first production of the Saint Berdoodle, yet it is presumable that the breed was created at the start of the 21st century. These hybrid dogs were an instant hit, for the reason that they always inherited the best and most wanted qualities and traits of their ancestors. Even though there are always disadvantages to these new hybrid breeds, designer dogs became insanely popular in the last 30 years. Unfortunately, this popularity does not mean, that we know every detail about these hybrid breed’s ancestry, and the intention which led the breeder to develop these dogs.

Speaking of the two-parent breed’s history, they both go back to the Medieval Ages to Europe. Saint Bernard is a Swiss dog breed, that was developed in the 1600s, by the monks. It is presumed that they were bred from Bloodhounds, Newfoundland, with the addition of the Swiss Mountain Dogs. Whereas the Poodle is thought to be developed in Germany, yet popularized in the 1700s, in France. The Poodle is an excellent base for forwarding cross-breeding processes, because of its different sizes, and colors. The Poodle was a great hunter, circus performer, truffle sniffer, and ultimately a great family companion. Consequently, the rationale to combine the protectiveness and rescue nature of Saint Bernard with the intelligence and trainability of the Poodle for a family pet was strong. Nowadays, Saint Bernard is still highly respected as the National Dog of Switzerland, but they are kept as family pets, rather than working rescue dogs.

As most of the purebreds, the Standard Poodle and Saint Bernard got recognized in the late 1800s, by the AKC (American Kennel Club) and also by other major kennel clubs too. Although, this does not mean automatic recognition for the hybrid Saint Berdoodle. Just like almost all new designer breeds, most of the Saint Berdoodles on the market, are first-generation hybrids. Moreover, the breed did not get registration yet, due to the lack of a breed standard and the lack of the specimen’s homogenous appearance. The ultimate aim for the breeders is to develop enough consistency to give the breed official status, but this goal is still many generations away from now.

How old is my Saint Berdoodle in human years?