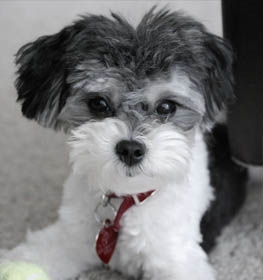 Collection of all the general dog breed info about Shih-Poo so you can get to know the breed more.

The Shih-Poo, or in its other names, the Pooshi, or the Shoodle, is a new designer dog breed, the result of cross-breeding the Toy Poodle and the Shih Tzu with each other. New hybrid dogs partly from the Poodle have been popular since the middle of the 20th century when the Cockapoo stole everyone’s hearts with its low-shedding coat, loving personality, and intelligence. This is the reason why, since then, breeders always go back to the Poodles, in order to involve them in the creation of a whole new breed.

The exact origin of the hybrid breeds is always surrounded by a lot of mystery. The trend of creating new hybrid breeds started around the 1980s, in North America, with crossbreeding purebred dogs with each other, in order to create new breeds. These hybrid dogs were an instant hit because they always inherited the best and most desirable qualities and traits of their ancestors. Even though there are always disadvantages to these new hybrid breeds, designer dogs became insanely popular in the last 30 years. Unfortunately, this popularity does not mean, that we are certain about every detail of these hybrid breed’s ancestry, and the intention which led the breeder to develop these dogs.

The Shih-Poo is a result of two breeds, each with long and detailed histories, going back to several hundred years. The Shih-Tzu is considered to be one of the 14 oldest dog breeds in the world, originating from China. Whereas, the Toy Poodle finds its origins in Germany, also dating back to hundreds of years. Even though it is not totally clear when the breed was created, or by whom, but it is considered to be true, that there were many reasons to create the Shih-Poo. This hybrid breed was developed in order to make the perfect companion in the city and also in the countryside, with the added benefit of their hypoallergenic coats. Shih-Poos inherited the Shih Tzu’s loyalty and their cute physical appearance. From the Toy Poodle, the breed got their sophisticated looks and their outstanding intelligence.

Being a relatively new breed, the dogs can come in a variety of sizes and colors even from one litter, thus each individual specimen’s uniqueness is unpredictable. Moreover, most of the Shih-Poos are first-generation specimens, which means, that both of their parents were purebreds, one was a Toy Poodle and the other was a Shih Tzu. The breeding cycle did not reach the stage when breeders could make the second generation, “pure” Shih-Poos just yet. Mainly, this is the reason why this hybrid breed, did not get recognition from any of the major kennel clubs.