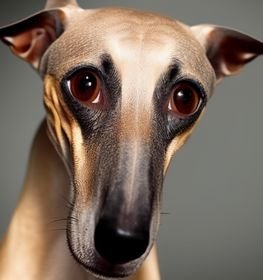 Collection of all the general dog breed info about Chippiparai so you can get to know the breed more.

Chippiparai As a Working Dog

The Chippiparai is a sighthound breed that originates in Southern India. The breed is most widespread in Tamil Nadu, where it is thought to have originated, but it is also seen in smaller numbers in Kerala, which is a nearby state. However, until the last 50 years or so, dog breeders in India focused solely on working ability, especially in the case of working dogs. If pedigree and pureblood were considered at all, it was a minor consideration. Moreover, they haven’t kept any records or written documents about dogs which makes it extremely difficult for experts and historians to look into the origins of native breeds such as the Chippiparai. Although, it is safe to say that the breed is most likely linked to India’s other native sighthound breeds, such as the Rampur Greyhound, Kanni, Mudhol Hound, Combai, and Rajapalayam, the exact relationship between them is unknown. The age of the Chippiparai is one of the major mysteries surrounding the breed. The Chippiparai is almost probably an ancient breed, but it could have evolved anywhere from hundreds to thousands of years ago.

Furthermore, there are many theories concerning the origins of the breed. The most popular one claimed by many is that the Chippiparai is most similar to the Saluki and probably a descendant of that breed. The Saluki is said to be the world’s oldest purebred dog, with archaeological evidence indicating that it was created by the Ancient Egyptians and Ancient Mesopotamians up to 7000 years ago. The Saluki has long been thought to be the ancestor of all sighthounds, spreading across the ancient globe through commerce and conquering. However, in recent years, genetic tests have shown that sighthounds are probably not all directly descended from the Saluki but were instead developed independently several times throughout history in different places. According to experts, the Chippiparai and other Indian sighthounds are far more similar to Central Asian sighthounds than the Saluki, and the Indian breeds are much more likely to be descended from Central Asian canines due to the long history of contact. However, there is also a possibility that the Chippiparai and other native Indian breeds were developed entirely from local dogs. The ruling elites of the Indus Valley Civilization developed their own hunting dogs, which may very well have been sighthounds, and possibly the ancestors of all Indian sighthound breeds.

Moreover, whenever and however the Chippiparai was developed, it is sure that it became highly valued in Southern India. The caste system, which is a major aspect of Hindu religion, firmly separated and stratified Indian society until late in the colonial period. The Chippiparai was almost exclusively retained by the governing and rich castes, as they were the only Indian citizens who could afford to keep a dog and hunt with them legally. The royal families of Madurai, Thanjavur, and Tirunelveli were particularly fond of the Chippiparai. The breed was used as a coursing dog. When ground-dwelling prey was seen, this incredibly fast breed was unleashed to hunt it down. When the Chippiparai caught its prey, it either killed it or held it until its master arrived to finish the job. Chippiparais were used to hunt deer, gazelle, hare, rabbit, squirrel, bustards, and pheasants, as well as other species present in Tamil Nadu that are comparable in size or smaller than the breed. However, because the Chippiparai was so driven to chase prey, it needed to be contained at all times to prevent it from running off. The breed was kept tied or chained at all times. As cruel as it sounds, it had one positive consequence, which was that it kept the breed pure for generations by preventing them from random breeding, as was the case with most Indian canines.

Life in Southern India is extremely challenging not just for people, but for dogs as well.  The tropical heat regularly exceeds 100 degrees Fahrenheit in the shade, which allows hundreds of species of disease and parasites to thrive, many of which are lethal to dogs. The region is also home to a number of dangerous animals, such as cobras, venomous snakes, crocodiles, bears, lions, and so on. However, it is interesting that the Chippiparai became extraordinarily well-adapted to life in its homeland. The breed is one of the most heat tolerant of all breeds, able to work at a high level for hours in conditions that would kill many other breeds in minutes. The Chippiparai also evolved inherent resistance to a variety of diseases and parasites, as well as survival skills when confronted with potentially lethal wildlife and the ability to live on very little food.

Furthermore, the Chippiparai, like most Indian breeds, was largely ignored by European colonial rulers. Despite the fact that sections of Tamil Nadu were occupied by the Portuguese, Dutch, French, and British empires at one time, none of them were interested in the breed. The general opinion was that Indian dogs were inferior to European varieties, with the majority of them being nothing more than strays. Some of these ideas pervaded Indian thought, and the majority of Indian breeds were mostly overlooked. Moreover, as there was no unified Indian Kennel Club on a national level until 1956, Indian breeds also suffered from a lack of formal recognition. The Chippiparai’s numbers have been steadily declining over several years due to a lack of enthusiasm. The breed is now considered extremely rare, with only about 50 municipalities remaining in the traditional strongholds of Madurai, Thanjavur, and Tirunelveli. Almost the entire global Chippiparai population now lives in the Indian state of Tamil Nadu, while a small number of breed members also reside in Kerala, a nearby state.

As the Chippiparai is already very rare and its numbers continue to decline, many experts fear that the breed is in imminent danger of extinction. The Kennel Club of India and the United Indian Kennel Club are the two major Indian dog registries that currently recognize the breed. However, there has been little interest in breed-in dog exhibitions, and it is rarely seen in Indian dog shows. The Kennel Club of India established a center in Chennai in 1982 to promote native breeds. The center has greatly increased interest in several breeds but has had little impact on the Chippiparai.

How old is my Chippiparai in human years?